Firefighters say string of fires in Guerneville could be arson

KGO
By by Elissa Harrington
GUERNEVILLE, Calif. (KGO) -- A string of fires in Guerneville has residents worried about a possible arsonist.

One fire targeted the Russian River Health Center, which has been in the community for more than 40 years.

Federal investigators are taking a good look at the fires, which firefighters say could be the work of an arsonist. A map shows how close in proximity all these fires have been. A couple happened within just an hour of each other. 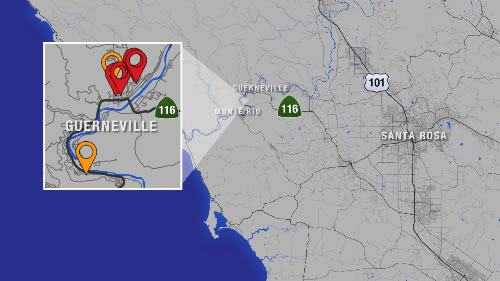 This map shows a string of fires in Guerneville that occurred during the past 10 days.

Guerneville resident Chrisie Guerne shot video early Saturday morning of the Russian River Health Center, which is across the street from her house, going up in flames.

"It was only a matter of minutes before it was just gone," Guerne said. "The upstairs roof was completely engulfed in flames."

There were five fires in Guerneville in the past 10 days, and the latest one tore through a home Sunday. The residents weren't home. That fire happened one day after the fire at the health center, which is being called suspicious. It started in a room near an elevator shaft and shot up to the attic.

"Originally, we thought it might be somebody trying to get out of the cold and building a fire to stay warm, but this fire here was too fast, too quick to be a warming fire that got away," said Monte Rio fire Department Chief Steve Baxman.

Baxman says it could be connected to a fire that burned a vacant building just a block away. It appears someone broke into the former motel under renovation.

"We pretty much do everything we would normally do in our medical clinic. The doctors are diagnosing and treating patients. There's exam tables," said Mary Szecsey of West County Health Centers.

Meanwhile, the ATF has joined the investigation while neighbors keep a watchful eye for a possible arsonist. 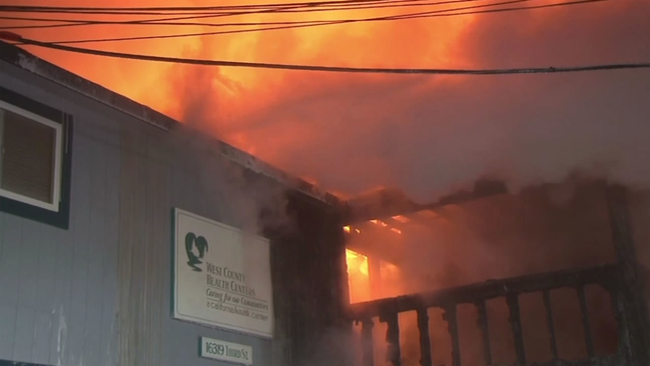