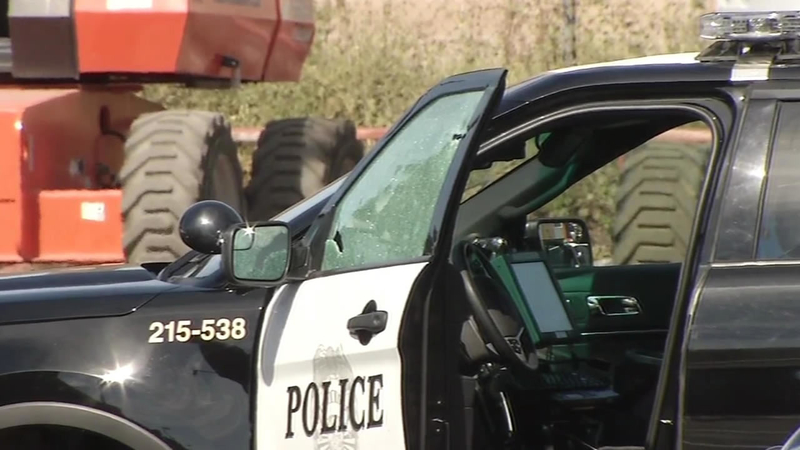 Police are reporting two separate shootings occurred in the Irvington area. At around 1:33 p.m., police say a patrol officer said he was hit by a car at Fremont and Washington boulevards.

Police say that officer attempted a traffic stop behind an AutoZone and a suspect vehicle then backed into the officer. Shots were also fired.

The officer was hit by gunfire, but it was unclear if both the suspect and the officer fired shots. That officer has been transported to a trauma center.

"Definitely sustained injuries. We're not going to confirm if it was a gunshot, but we believe the vehicle backed into the officer. The officer went down. There were shots fired," said Fremont public information officer Geneva Bosques.

The suspect fled the scene of the crash on foot and ran inside a nearby Safeway store. Witnesses say they saw the suspect brandishing a small handgun inside the the supermarket as he was running from police.

"He went in the back and then I saw SWAT come in from by the produce department. Then I saw another one in the frozen foods department. Then they said, 'duck,' so we all ducked down," said Safeway worker Ryan Matias.

Fremont officers then encountered at least one suspect for a second time on the 1300 block of Roberts Avenue at 1:43 pm. Shots were fired again and a second Fremont officer was injured.

Police say there is at least one suspect. Police described the suspect as a Hispanic male about 6-feet tall, with a mustache, a shaved head and wearing an orange San Francisco Giants jersey. The suspect is described as about 30 to 40 years old.

Alameda County Deputies are leading the tactical search for the suspect and are going door-to-door searching for the suspect. A shelter-in-place has been issued for the area surrounding the incident. More than 100 law enforcement officers from several agencies are assisting in the search.

Authorities said the officer in the first encounter was once and went into surgery and is now in critical condition. The second officer was shot twice and is in stable condition. Both officers were admitted to the San Jose Regional Medical Center.

Officers brought in what appeared to be a friend or family member of one of the officers. She was driven in by police and escorted inside.

Officials are investigating a motive for the shooting.

Please avoid areas within the below perimeter until further notice. pic.twitter.com/ggj7EtneZC

6)Limited suspect info: One described as Hispanic male adult, approx. 6' wearing @SFGiants shirt/shorts. We cannot confirm is he is injured.

4)Multiple shots were fired during second suspect encounter another FPD officer was injured.Both officers have been transported to hospitals

2) Shots were fired after vehicle backed into officer's car. The officer was injured and suspects fled on foot.

We are working an OIS with shots fired. 2 officers with injuries transported to trauma centers. More details as they are available.

At this time...2 FPD Officers transported to the local hospitals.