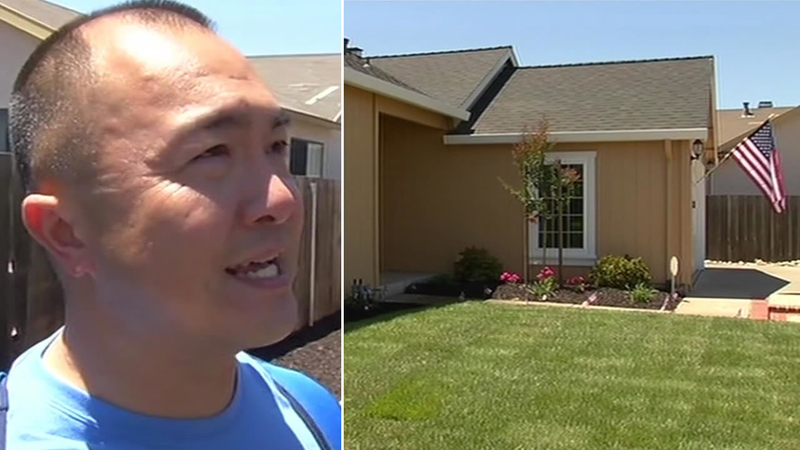 SUISUN CITY, Calif. (KGO) -- There was a homecoming in Suisun City on Tuesday. The family moving in came from the military. They arrived home in a limousine. And having moved so many times before they said this is it, no more, they're done. But there was a twist to this story.

It was not just a twist, but a surprise. The surprise began with flags adorning the lawn and home. Marine Corps Master Sgt. Jacinto Bernardo wasn't expecting the flags when he got home, but it was very appropriate considering he spent 21 years in the Marine Corp. Another surprise was the condition of the house when he returned home.

He didn't want a limo and he never expected the media. After a long trip home from his posting in Okinawa, all that newly retired Sgt. Jacinto Bernardo wanted was an In-N-Out burger.

The newly retired veteran was speechless while looking at a home that was completely upgraded from the one he and his family bought in Jan., and had expected to see.

"We chose it because it was the only thing we can afford, sir," said his wife, Julie Bernardo.

Sgt. Bernardo added, "I knew it would take a lot of time and a lot of effort and money."

And it did, but not by him.

Instead thank Epperson, his old boot camp and Marine pal, who took one look at the place and deemed that no retiring Marine should return to such a mess.

He rounded up volunteers, money, and put $70,000 worth of work into the house as part of a program he's calling Homecoming Heroes.

"Twenty one years in the Marine Corps, retiring, you don't deserve to come back to a house where you have to spend a lot of your savings and time fixing it up," Epperson said.

The result -- new floors, new carpets, new fixtures, a new kitchen, and in the backyard a fresh new lawn.

What a surprise for a Marine Iraq combat veteran, now making a difficult transition to civilian life. He's on his own for the first time in 21 years.