OAKLAND, Calif. (KGO) -- Dozens of demonstrators gathered in front of an Oakland church Friday to protest the promotion of two officials that are connected to the Bay Area-wide police sex scandal. Sources say the two were involved in a cover-up.

The group stood with signs outside the Greek Orthodox Cathedral in the morning and some of the demonstrators yelled at Oakland Mayor Libby Schaaf as she drove into the parking lot.


Protestors outside ceremony to promote 2 Oakland police officials who they say were involved in mishandling of officer misconduct probe pic.twitter.com/sTF9ZmjvYP

The group told the mayor to leave office over the scandal involving police officers and Jasmine Abuselin, a young prostitute formerly known as Celeste Guap.

The group is picketing the promotions of two officers who they say failed to properly oversee the investigation.

A federal report last month found top officials at the department and the city mishandled the investigation. The East Bay Express reports two high ranking officers involved, John Lois and Ronald Holmgren, are now being promoted by the chief.

Protestors outside @oaklandpoliceca promotions ceremony. Claim at least two of those being promoted involved in cover-up of sex scandal. pic.twitter.com/GchXc4d7Ub

"You can't promote cops who cover up rape scandals, you know what I mean?" said James Burch with the Anti-Police Terror Project "That's what we're talking about today -there was a young woman who was raped by several officers in this department. And in response, instead investigating, instead of taking those officers out of the force, they've responded by covering it up."

The mayor responded with this, "We believe in freedom of speech, that is a sacred right in the city of Oakland. I appreciate all voices; that's an important part of democracy."

Holmgren is reportedly being promoted to captain and Lois is said to be promoted to assistant police chief, the second highest post in the department.

Oakland police did not comment Friday morning on the promotions, but a spokesperson echoed the mayor's response by saying the protestors have their rights to express themselves. 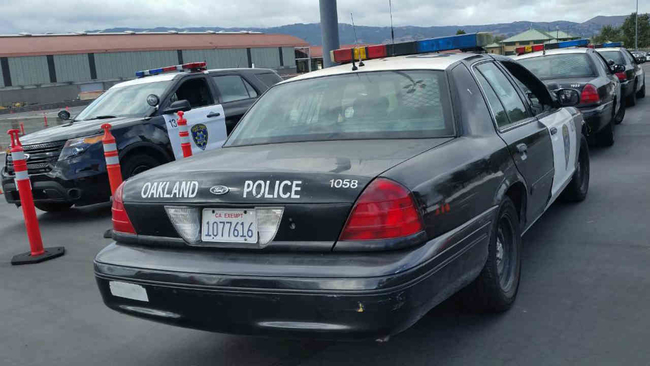