KGO
SAN FRANCISCO (KGO) -- The husband of a woman who was paralyzed by a falling tree branch in San Francisco is asking the city to take better care of its aging trees. A neighborhood group that partners with the city on tree maintenance is meeting on Wednesday night.

The San Francisco Recreation & Parks Department says it has about 150 neighborhood groups that partner with it to take care of the city's parks. But after the horrible accident, you can imagine there's some extra scrutiny at Washington Square Park.

City workers are taking stock of the trees in the square.

They say the canary island pine that fell was healthy. That species was pruned in 2013 after a neighborhood organization, Friends of Washington Square, donated $10,000 to Rec & Park.

"Our collaboration with the department has been good," said Ken Maley with Friends of Washington Square. "But we've also learned the department is really stressed with its crew and that means it doesn't have the budget to expand."

Maley says his group developed the first long-term tree maintenance program for the square back in 2008, and will meet Wednesday night to update the strategy. He believes the recent accident has prompted greater attention from the city.

The mayor has visited the victim in the hospital and her husband hopes the city will make tree safety a priority.

"(Make sure) it's just not going to happen again to another family," he said.

Experts say trees should be pruned every 15 years. However, according to a report by the nonprofit Parks Alliance, San Francisco has only enough arborists to prune its 177,000 trees once a century.

A GoFundMe page has been set up for the family. If you'd like to help, click here.
Related topics:
san franciscowashington square parktree fallaccident
Copyright © 2021 KGO-TV. All Rights Reserved.
RELATED 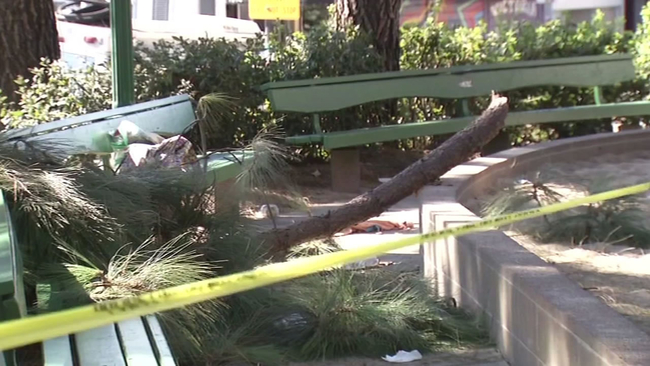