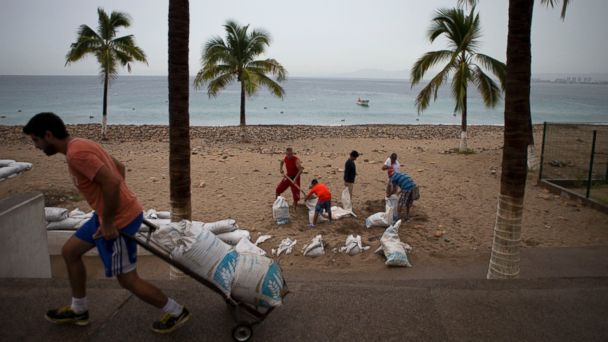 A newlywed couple spending their honeymoon in Puerto Vallarta was forced to evacuate their hotel were at a makeshift shelter with other tourists as Hurricane Patricia barreled toward Mexico.

Dustin Smith told ABC News that he and his wife Amanda had been enjoying "just beautiful" weather ever since they landed in Mexico on Sunday. The Category 5 storm made landfall along the southwestern coast about 7:15 p.m. Friday with winds of 165 mph.

But the first warning signs that trouble was ahead came in the form of a warning from the hotel Thursday night, followed by an evacuation order this morning.

"We had to throw everything in the bathroom and we could only bring a small bag," Smith said. The couple were moved to a local school that has been converted into a hurricane shelter.

The Smiths, from Bloomingdale, Ill., were scheduled to return home on Sunday but now aren't sure when they can leave Mexico.

Though Smith said there's plenty of water and food to go around, the strength of the storm has him worried.

"We have some friends from Louisiana and they said Katrina was level 3 when it hit landfall, and this is supposed to be level 5," Smith said.

The National Oceanic and Atmospheric Administration warns that Hurricane Patricia is "headed for potentially catastrophic landfall" and it could impact at least four Mexican states: Michoacan, Colima, Jalisco and Nayarit.

Monika Chroust-Masin, 61, was vacationing with her husband Martin and son Eric when they were evacuated to a school in the northern hills of Puerto Vallarta.

Chroust-Masin, who lives in McMinnville, Ore., said that mostly people in the shelter were "killing time" on the Internet while it still worked.

"People are sleeping on the floor waiting in different classrooms," Chroust-Masin told ABC.

Stacy Zapar arrived in Mexico on Wednesday with her husband Greg and their two children from San Diego.

"We've been running around trying to find a way out," Zapar told ABC News. "Turns out all the flights out of Puerto Vallarta are cancelled. The whole hotel -- or the whole airport, rather, is shut down."

They did make a trip to the grocery store to stock up on water, flashlights, batteries and "coloring books for the kids since their iPads probably won't last too much longer once the electricity goes out."

She added: "It took well over an hour to check out. They were boarding up the grocery stores all the way around even if there were metal pull down crates. And the windows they were still boarding them up."

Some locals, like Canadian David Lloyd who now lives in Puerto Vallarta year-round, have opted not to leave their homes but to hunker down. In Lloyd's case, he turned his interior guest washroom into a bunker.

"We have our food and water that will hopefully sustain us through whatever the duration of the storm is," he told ABC.