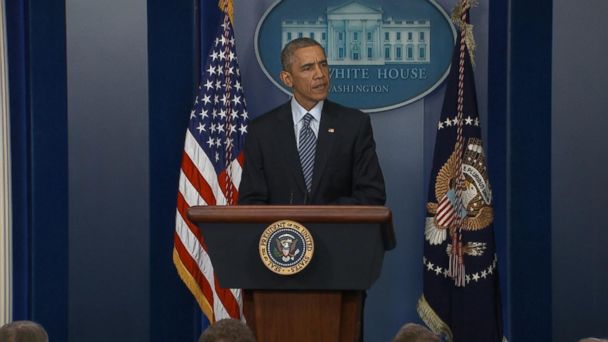 President Obama tonight urged the public to accept the grand jury's decision not to indict the Ferguson, Missouri, police officer who fatally shot an unarmed teenager this past summer, saying that "it's an outcome that, either way, was going to be subject to intense disagreement."

"We are a nation built on the rule of law, so we need to accept that this decision was the grand jury's to make," he said.

Obama's statement came less than an hour after it was revealed that the St. Louis grand jury decided not to indict police officer Darren Wilson in the fatal shooting of Michael Brown.

"Hurting others or destroying property is not the answer," he said.

At the same time, the president also appealed to law enforcement officials in Ferguson to "show care and restraint."

"The situation in Ferguson speaks to the broader challenges we still face as a nation," Obama said, noting that "a deep distrust exists between law enforcement and communities of color."