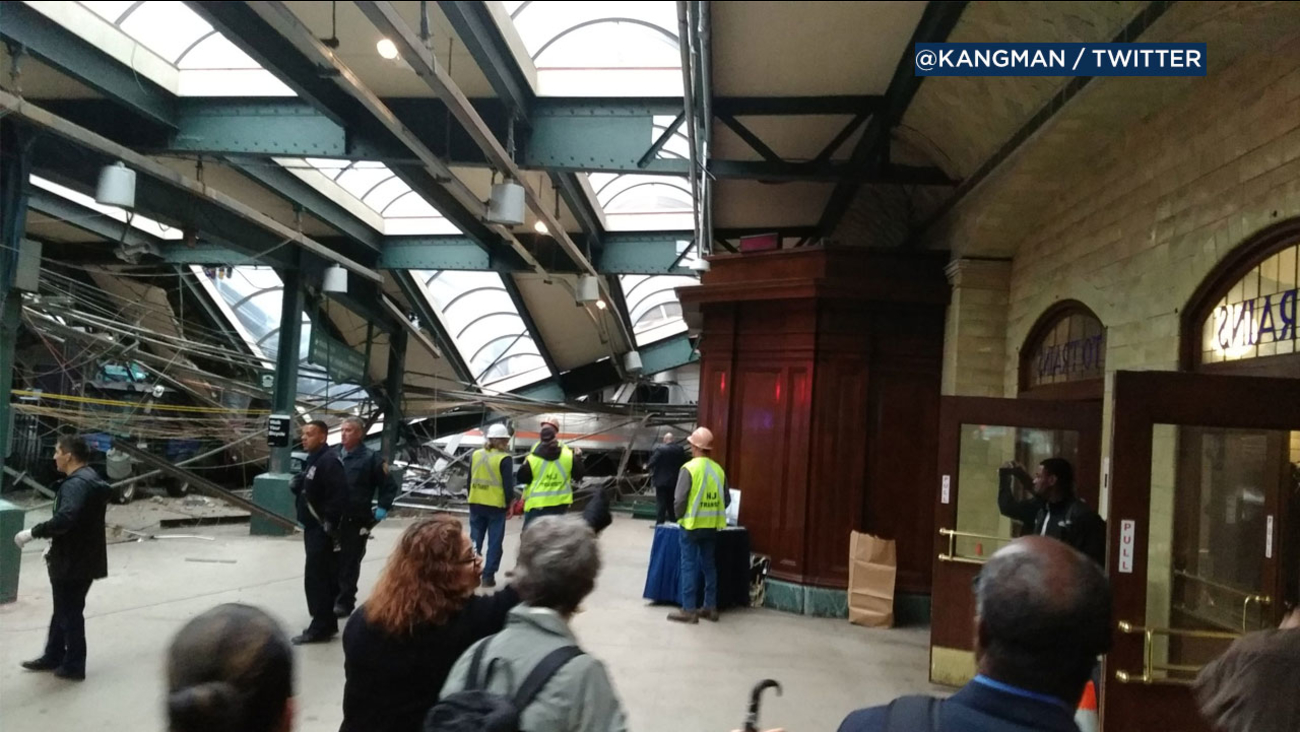 HOBOKEN, N.J. -- Federal investigators are trying to determine what happened before a New Jersey commuter train barreled through a station and crashed into a barrier, causing a young mother to be killed by falling debris and injuring more than 100 others.

Investigators from the National Transportation Safety Board will be looking to determine how fast the train was going when it crashed at the busy Hoboken station Thursday morning.

Their investigation will seek to answer many questions, including whether a system designed to prevent accidents by overriding the engineer and automatically slowing or stopping trains that are going too fast could have helped if it had been installed on the line.


Investigators recovered an event recorded from the locomotive Thursday night and will be examining it Friday, NTSB vice chairwoman T. Bella Dinh-Zarr said Friday morning on ABC's "Good Morning America." The device contains information on the train's speed and braking.

More than 100,000 people use New Jersey Transit to commute from New Jersey to New York City each day. The NJ Transit portion of the Hoboken station remained closed on Friday, slowing the morning commute for those making connections there.

As investigators began their probe, the family of Fabiola Bittar de Kroon, the crash's sole fatality, was in mourning. De Kroon had recently moved to New Jersey from Brazil after her husband got a job with an international liquor company.

Dozens were injured and one killed in a fatal train crash in Hoboken, New Jersey on Thursday morning.

She had just dropped her toddler daughter off at daycare before rushing to catch a train, according to daycare director Karlos Magner.

"She was dropping off the daughter, I was closing up the stroller," he recalled. "We had a good talk for like a minute. And she said she was in a rush."

Shortly after, the NJ Transit train ran off the end of the track as it was pulling in around 8:45 a.m., smashing through a concrete-and-steel bumper. As it ground to a halt in the waiting area, it knocked out pillars, collapsing a section of the roof.

De Kroon was killed by debris, and 108 others were injured, mostly on the train, New Jersey Gov. Chris Christie said. Scores were hospitalized, some with serious injuries including broken bones.

The engineer, Thomas Gallagher, was pulled from the mangled first car and was treated and released from a hospital. Officials said he was cooperating with investigators. Gallagher has worked for NJ Transit for 29 years, and a union roster shows he started as an engineer about 18 years ago.

New York Gov. Andrew Cuomo said investigators will determine whether the explanation was equipment failure, an incapacitated engineer or something else.

Some witnesses said they didn't hear or feel the brakes being applied before the crash. Authorities would not estimate how fast the train was going. But the speed limit heading into the station is 10 mph.

"The train came in at much too high rate of speed, and the question is: 'Why is that?'" Christie said.

Cuomo, a Democrat, and Christie, a Republican, cautioned against jumping to conclusions about the role that the lack of positive train control played or didn't play in the tragedy.

The NTSB has been pressing for some version of the technology for at least 40 years, and the industry is under government orders to install it, but regulators have repeatedly extended the deadline at railroads' request. The target date is now the end of 2018.

Over the past 20 years, the NTSB has listed the lack of positive train control as a contributing factor in 25 crashes. Those include the Amtrak wreck last year in Philadelphia in which a speeding train ran off the rails along a curve. Eight people were killed.

In 2011, a Port Authority Trans-Hudson, or PATH, commuter train crash in a separate section of the Hoboken station injured more than 30 people. The NTSB found the engineer failed to control the speed of the train as it entered the station and investigators also determined a contributing factor was the absence of positive train control.

"They'll have to answer for themselves, but at the end of the day if safety is job one ... then you have to have a better record than New Jersey Transit has right now," said Sen. Bob Menendez, a Democrat from New Jersey, noting that the transit agency said in a 2016 report with the Federal Railroad Administration that it didn't have positive train control on any locomotive or segment of track.

Even without positive train control, there are still safeguards in place in Hoboken.

NJ Transit trains have an in-cab system that is designed to alert engineers and stop locomotives when they go over 20 mph, according to an NJ Transit engineer who spoke on condition of anonymity because he was not authorized to discuss the accident.

Trains like the one in Thursday's crash also are equipped with a system that sounds a loud alarm and eventually stops the train if the engineer goes 15 to 20 seconds without touching the controls.

But it was unclear whether those mechanisms kicked in or would have made a difference if they had.

Michael Larson, an NJ Transit employee working in the terminal about 30 feet away, said he saw the train go over the "bumper block" and lift up into the air, stopping only when it hit the wall of the station's waiting room.

As the train hurtled into the depot amid concrete dust and dangling electrical wires, "I couldn't believe what I was seeing," he said.

Tom Spina, a maintenance supervisor for a private company was in the terminal after having worked the night.

"It was chaotic. There was yelling and screaming, a lot of people in shock," Spina said. "Things like this we see in movies," Spina said. "You don't think you're going to see it in real life." 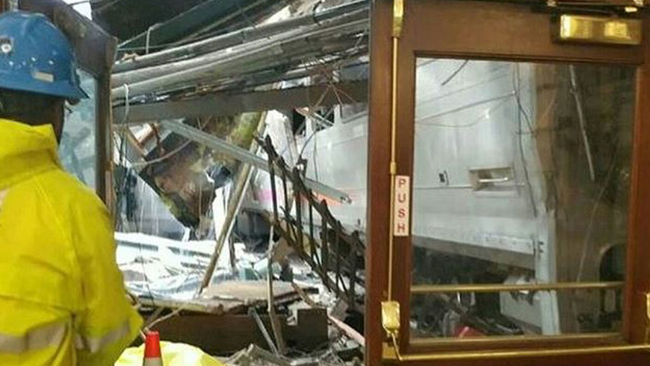 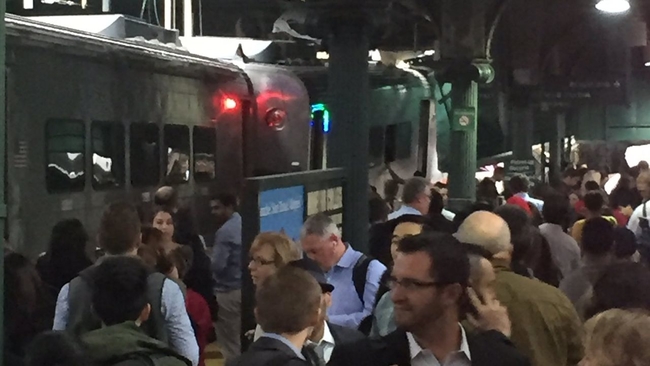 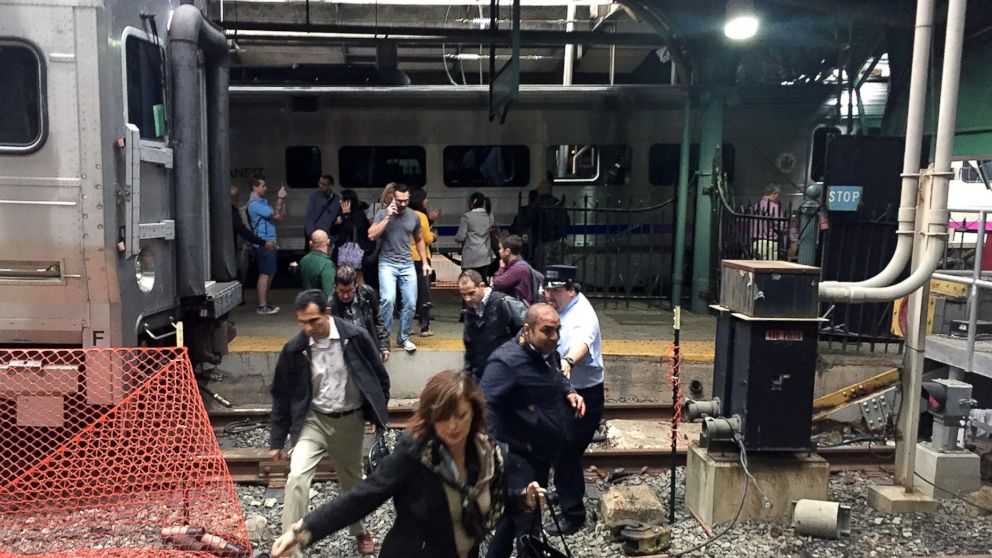 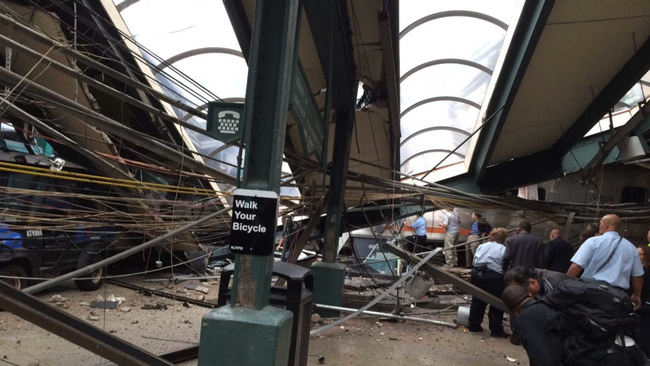 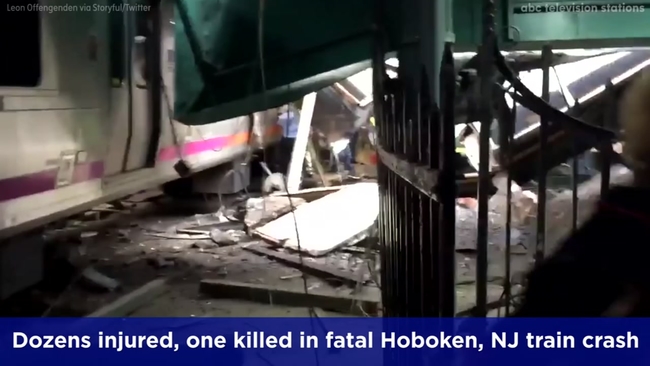 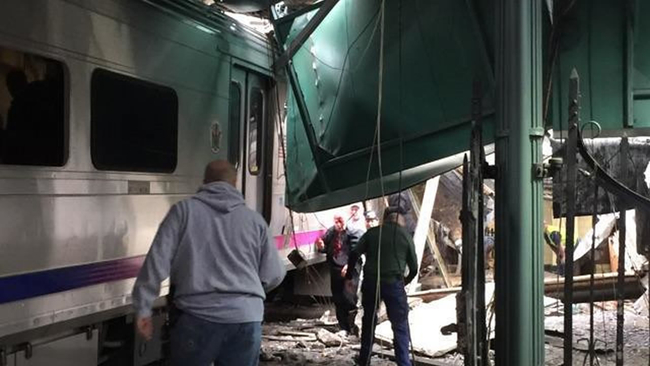