Kasich 'Would Send Somebody' to Supreme Court if He Were President 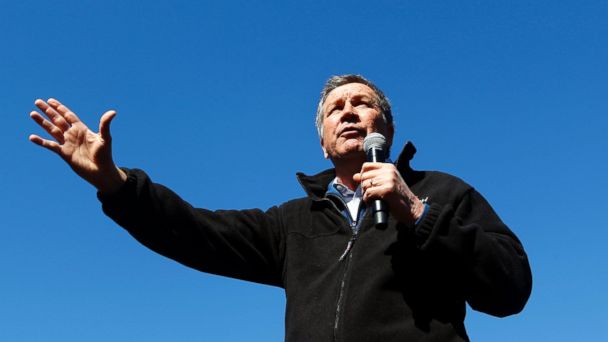 Republican presidential candidate Gov. John Kasich said Sunday he does not think President Obama should nominate someone to the Supreme Court following Associate Justice Antonin Scalia's death, but admitted that if he were president he would select a nominee.

"Of course I would send somebody," the Ohio governor said on ABC's "This Week with George Stephanopoulos." "But it would probably be a different situation."

Scalia's death has pushed the issue of Supreme Court nominations to the forefront of the 2016 presidential race. Obama said he intends to name a nominee, but Congressional Republicans contend replacing Scalia should be left to the next president.

Kasich said the "polarized" culture in Washington could lead to a contentious confirmation process, and predicted that the Republican-led Congress would not confirm a nominee by Obama, a Democrat.

He added "one of the reasons I'm running for president" is to improve those relations. For weeks, Kasich has pitched himself as a candidate with a "positive" message amid an onslaught of negative attacks from his rivals.

Kasich said if the nomination to the high court is left up to the next president, "people will in a very unusual way indirectly pick the next Supreme Court justice."

When asked what characteristics he would seek out in a judicial nominee, he pointed to his own record of selecting judges in Ohio.

"I would look for a conservative," Kasich said. "Somebody who doesn't make law but somebody who will interpret the law and we pick somebody who's sort of above reproach."

"It would obviously be somebody who, you know, is a constitutionalist and who's not interested in making law," he added.