KGO
KGO
By Vic Lee
SAN MATEO, Calif. (KGO) -- The world just cannot get enough of a real "cat burglar" on the Peninsula.

Over the last several weeks, the prolific thief has gotten so much notoriety, he has become a celebrity. Remember Dusty, the cat neighbors call "Klepto?" The house pet has now become a household name.

Dusty and his owners, Jean Chu and Jim Coleman, have become celebrities in their San Mateo neighborhood.

It all happened after ABC7 featured the prolific cat burglar in a story two weeks ago. His owners figure Dusty has stolen about 600 items in three years. He leaves home at night and returns with his loot in the morning. A camera installed by the Animal Planet Network captured his nightly heists for a week. His record is 11 different items in one night and he is not choosy about what he steals from neighbors. He takes gloves, shoes, children's toys and even people's personal items.

Jay Leno even had some fun with Dusty. David Letterman flew Dusty and his family to New York to appear on his show this week. Dusty's been on radio and TV all around the world. The farthest was a radio station in Australia, Sydney. Talk about the internet... Dusty has had more than 2 million hits. This story has gone absolutely "feral."

Neighbors with missing belongings now know where to go. 6-year-old Sean Somers cannot even count how many swimming trunks he has lost over the years.

"I can't remember because it was pretty much in my past," he said.

Two weeks ago, Sean saw his bathing suits in the story aired by ABC7. He said they looked familiar. He got them back, but there are still other things missing from the Somer's home.

"I am missing a chair so maybe, you never know," Sean's mom said.

Dusty's owners have now installed a burglar alarm to warn neighbors of any new thefts. They put a bell on Dusty's collar. That is good news for neighbors like Kelly McLelland, who had her bikinis stolen.

"You can hear him. Even inside your house, you'll hear a bell ringing and you know he's in your backyard, or has just left your backyard with something," she said.

The bell seems to be working, for the most part. Recently, Dusty's owners found a glove.

With all the new "purrrks" he has brought to his household, for Dusty, maybe, just maybe, crime does pay.
Related topics:
san mateocrimedistractionanimal
Copyright © 2020 KGO-TV. All Rights Reserved.
RELATED 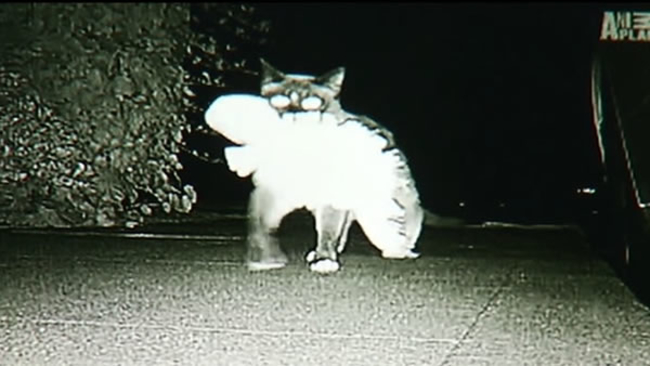