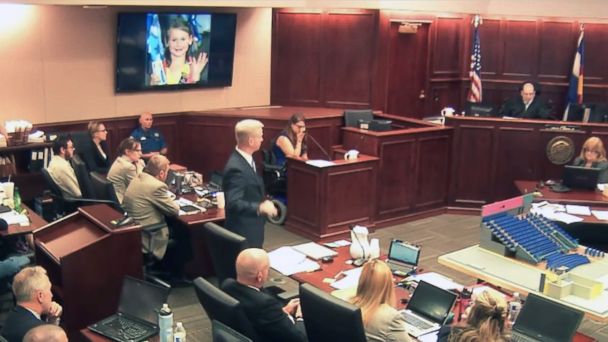 After 11 weeks, closing arguments in the trial of Aurora, Colorado, theater shooter James Holmes are scheduled to start Tuesday, and the jury is expected to start deliberations on Wednesday.

The admitted gunman faces 166 charges, including first degree murder, for opening fire on a crowded premiere of "The Dark Knight Rises" at an Aurora movie theater on July 20, 2012.

Here are 10 of the most notable aspects the 47-day trial.

On April 27, the prosecution and defense each had two hours to lay out their cases and if you weren't watching, you missed a condensed version of the 11 weeks ahead.

Prosecutor George Brauchler gave the "Star Wars" of opening statements, presenting 837 slides, playing portions of a 911 call and lifting a heavy evidence bag of ammunition to show the packed courtroom. "Through these doors," he told the jury, victims' families and media, "400 people went to be entertained and one person came to slaughter them." As he showed pictures on three courtroom monitors, he repeated one word, "Boom."

When it was his turn, public defender Dan King waved around the world's first and only glimpse of one of the most critical pieces of evidence in the case -- the killer's notebook. "When James Holmes stepped into that theater in July of 2012, he was insane," he said. As the first day of trial ended, you could hear the sobs in the courtroom and people walked out visibly shaken.

Many of the victims who testified had severe injuries, the effects of which some will live with for the rest of their lives. The prosecution's line-up made sure that the first and last victims' stories were the most memorable. On the first day of testimony, Caleb Medley's father rolled him to the witness stand in his wheelchair. The night before the shooting, Medley did a stand-up comedy routine. Three days later, he was having brain surgery on one floor of the hospital while his first-born child was being delivered on another. Because of speech issues, he used an alphabet board and a pointer to spell his answers.

The DA's star witness, Ashley Moser, was paralyzed as well, but also suffered a miscarriage due to her injuries and was the mother of 6-year-old Veronica Moser-Sullivan, the only child killed in the theater. Moser's tearful testimony ending the prosecution's case on a Friday afternoon had gut-wrenching impact.

Dozens of police officers, firefighters and medical personnel who rushed to the scene testified, some of them describing the movie still playing amidst the carnage inside the theater. Many of them described how they transported severely injured victims in their patrol cars because there weren't enough ambulances. It was heartbreaking to watch tough men in uniform break down as they described that night. Aurora police Sgt. Michael Hawkins was on the 3 p.m. to 1 a.m. swing shift when he got the call and drove 100 miles per hour to the theater. He is a big man and his voice broke as he described how Veronica Moser bled on him as he carried her tiny body out of the theater. "I realized she was probably gone," he sobbed.

The jury was riveted as explosives experts described how the defendant rigged his apartment with an elaborate Mousetrap game of chemicals and home-made devices triggered to catch fire, including pickle jars filled with napalm, gasoline-filled pop bottles and plastic spheres. The floor was so gasoline-soaked, the ceiling in the apartment below sagged with its weight. FBI Special Agent Grant Gumbinner described three different ignition systems, including one in the entryway of the apartment. "In the door you could see a fishing line attached to a thermos which was sitting on sneakers," he said. "The thermos was sitting over a frying pan full of an ingredient ... potassium permanganate."

The prosecution had a detective on the witness stand read portions of one of the most critical pieces of evidence in the case: Holmes' 29 page manifesto. He mailed the spiral notebook he titled "(Course) of Life" to his psychiatrist at the University of Colorado Medical School just hours before the shooting. Completely handwritten, it details his plans with stick figure drawings and theater diagrams. There is self-diagnosis, and motive for the killings, which the shooter called his theory of "human capitol," that is, for every person he killed, his life increases in value. He later explained in psychiatrist interviews that he wrote it "...to educate this psychiatrist so something like this wouldn't happen again. If I died it would have told my story."

Unaltered autopsy photos of all 12 victims were shown to the jury as the two coroners who did the examinations explained the injuries they suffered using a life-sized mannequin standing stiffly in a corner. The first one was perhaps the most powerful -- pictures and X-rays of 6-year-old victim Veronica Moser Sullivan. Tissue boxes were passed around the jury box as many wiped their eyes. Even Arapahoe County Coroner Michael Doberson had a hard time. "I'm sorry for this," he said.

It took six days, but the jury watched every second of 22 hours of psychiatric interviews the defendant, unrestrained in jail clothing, gave to court-appointed psychiatrist Dr. William Reid. It was the jury's only chance to hear from him, as he decided not to take the stand.

The chilling interview got rough for families when he calmly described in detail how every person he killed represented a value "point" for him:

Defendant: "I only count fatalities. The dead can't be repaired, or come back to be normal again."

Reid: "What about the wounded?

At about the middle of the trial, there was what seemed to be an epidemic of dismissed jurors. One was excused because she was talking to her husband about the trial on speakerphone during a break. Two who overheard were dismissed as well. Another had to step down because a relative was a victim of a random violent crime in downtown Denver. And yet one more was let go because she knew one of the witnesses, whose boys attended the school where she works. Other jurors who complained about snoopy reporters, looked like they were sleeping, or had a vent fan blowing in her eyes, got to stay. Out of an original 24 there are 19 left, of which seven are alternates. There are 14 women and five men. We will not know who are the real jurors until deliberations start.

9. BATTLE OF THE PSYCHIATRISTS

Two court-appointed psychiatrists deemed Holmes was mentally ill but legally sane the moment he started shooting, which, if they jury agrees, would ensure a guilty verdict; however, two defense psychiatrists said just the opposite -- that he experienced a psychotic episode that night and could not distinguish right from wrong. All four psychiatric experts did agree that, whether he is sane or insane, if not for his mental illness, the shootings would not have happened.

For weeks, the jury listened to discussion about schizophrenia, delusions, hallucinations, schizotypal personality disorder, medications and malingering. Of note were two and a half days of testimony from the defense's star witness, neuropsychiatrist Raquel Gur. She said that after six meetings with the defendant, she determined that the turning point of his descent into psychosis happened when he returned to grad school after Christmas break six months before the shooting. "When the train is beginning to derail it's a turmoil," Gur said. "Slowly, slowly almost like a tornado coming. It gains power."

10. MANY MOMENTS WITH THE JUDGE

Judge Carlos Samour, 48, has won the hearts of everyone in the courtroom, except maybe the accused shooter's defense team, whom he has admonished for interrupting and for failing to let go of a point after he has clearly ruled on it. During jury selection, Samour, who is from El Salvador, told the court, "If you're detecting an accent, it's not me. It's you."

His focus appears to be the law first, and secondly, making sure his jury gets through the emotionally grueling trial with as little pain as possible whether it's time out for a broken tooth, a bad back or a bathroom break.