KGO
LIVERMORE, Calif. (KGO) -- Two children were terrified and trapped while they were locked in a hot car as their mother gambled at an East Bay casino. Rescuers described the scared faces peering out at them from inside. The mother of the two children, 37-year-old Phaley Nget, was arrested at Casino 580 in Livermore for child endangerment.

Police say the mother is from Oakland and she was gambling inside the casino on Sunday around 6 p.m. The children are doing fine, but in Livermore the inside of a car can heat up like an oven very quickly and that's why police are not taking this lightly.

When Livermore police and firefighters responded to the parking lot across the street from Casino 580, they heard two small children crying and they saw the face of a 3-year-old girl peeking at them from the back window of the car. A 2-year-old girl was also inside.

"It's not OK to leave your kids in the car for even a minute," Livermore Police Ofc. Traci Rebiejo said.

Employees at a nearby company, who reported the kids, estimate they were in the car for 30 minutes to an hour. The mother was gambling inside Casino 580.

"She had covered the windows with blankets, so I don't know if that was to conceal the children inside or to try and keep the heat out of the car," Rebiejo said.

The kids were strapped into their car seats with the window cracked open. A firefighter reached in and opened the door. It was 75 degrees outside, but the temperature inside was 81 and rising.

"I wouldn't even leave my dog in the car for 10 minutes out here. Let alone my kids," Casino 580 patron Jessica Guerrero said.

Apparently, Nget saw the police activity and came out. She was arrested on the spot.

"We often will get a call for someone who runs into the store to buy a gallon of milk when they're in the store for a couple of minutes. I mean, she left them for over 30 minutes to go and do something for her pleasure," Rebiejo said.

Guerrero recognized Nget and said, "She's here quite a bit."

Police don't know if Nget has left her children like this before, but now she's charged with child endangerment and her kids are in protective custody.

And we're hearing about this type of thing happening more and more. Just last month, a San Jose woman was arrested for leaving her kids -- a 10-year-old and a 1-year-old -- in the car while she was at Graton Casino in Rohnert Park. She told deputies she was only going to be inside for a few minutes.
Related topics:
livermorechildren's healtharrestchildrencasinorescuehot carchild left in carchild endangerment
Copyright © 2020 KGO-TV. All Rights Reserved.
RELATED 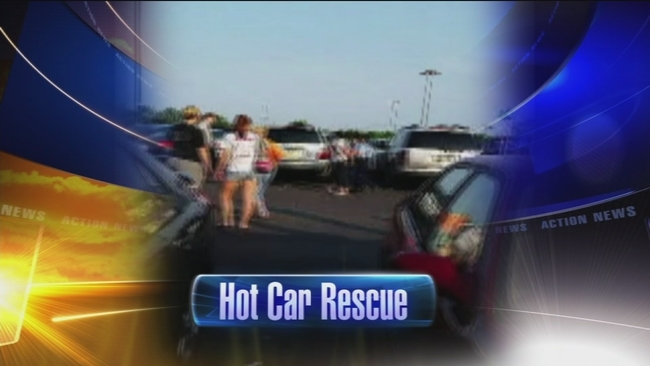