KGO
By by Wayne Freedman
SAN FRANCISCO (KGO) -- Officials say a mountain lion spotted at least four times in San Francisco last week is believed to have left town, making its way down the coast.

Animal care officials were at first uncertain that the mountain lion sightings were founded as it has been years since one has been spotted in the city, but surveillance footage surfaced Monday confirming the reports.

The big cat was first spotted in Daly City on June 29 and then twice on June 30 in Sea Cliff and in the Western Presidio. On July 1, one was spotted at Gough and Eddy, not far from San Francisco City Hall. And two days later, it was a seen near Lake Merced. "That's crazy, you don't know what they're going to do. It's unpredictable. There have been a total of five sightings reported recently," Frank Delligatti Jr. said.

Surveillance footage was taken on June 30 in the Sea Cliff neighborhood, the same day a driver in the Presidio reported seeing a mountain lion there.

Zara Mcdonald a researcher and video archivist of mountain lions around the Bay Area says it took patience and persistence to get the video.

She says Bay Area residents are not in danger.

There is no escaping the fact that mountain lions are predators, but humans are not on their menu. They are excellent at hiding, but if you were to see one of those large cats, its reaction might surprise you.

Mcdonald says we're seeing mountain lions now because cities are expanding into rangeland. While California Department of Fish and Wildlife officials say one possible explanation for more mountain lion sightings in the Bay Area could be due to the drought. "Primary food for mountain lion is deer so, if deer are moving into areas they're not necessarily supposed to be it would make sense lion would follow the deer," Hughan said.

Since here have been no sightings since last Friday, wildlife experts believe the mountain lion has made his way south down the Peninsula.

In May, wildlife officers put a tracking collar on a mountain lion in San Mateo before releasing him into the wild.

Anyone who spots a mountain lion is warned not to go near it and to immediately call Animal Care and Control at (415) 554-9400. 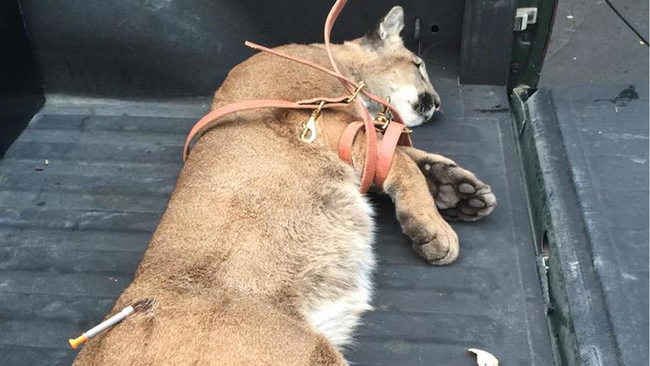