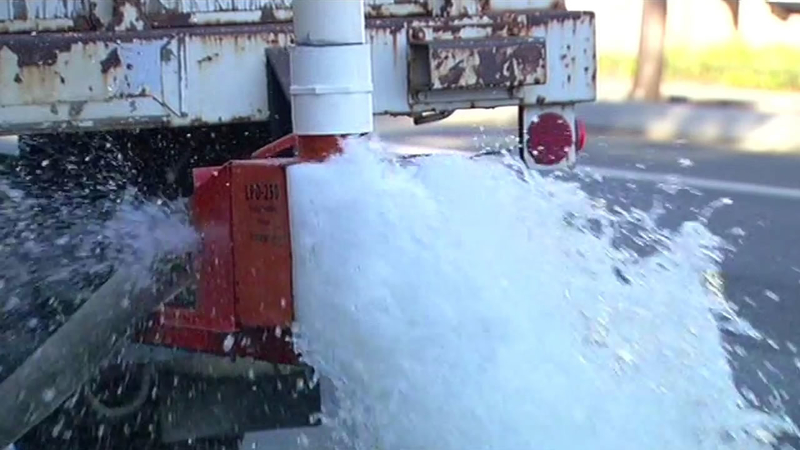 MOUNTAIN VIEW, Calif. (KGO) -- Crews in Mountain View are currently flushing out hydrants across the city to fix a stinky water problem.

California is in a drought, so spewing water out onto the street doesn't look good. Officials tried to put off doing it as long as they could but it couldn't be put off any longer.

"We are trying to be water conservation-minded but still have to operate a system which looks odd in this situation, but we can't survive without doing this," Asst. Public Works Director Gregg Hosfeldt said.

What finally pushed them into the situation was smelly water. Customers called and complained about the smell.

Ironically, it happened because people have done such a good job of conserving water. Instead of flowing, it sat and got stale.

"In December, we experienced our second lowest water use for a month in the last 10 years, so what happens is the water movement in the system slows down and, as a result, we need to do this kind of flushing you see behind you to keep the water fresh," Hosfeldt said.

The water wasn't unsafe, it was just stinky.

"It's unpleasant. We immediately did a number of water quality tests, and the water met all the standards, but the secondary part of that is we want the water to be really pleasant for our customers. So we decided to flush them really quickly and solve the problem," he said.

Water officials say they will probably spend the next two days flushing out hydrants. Even though it's tough to watch the water go down the drain, they say this amount isn't that significant.

"This is just a couple tenths of a percent of our water consumption in the city, so it's a very small portion but, again, really critical," Hosfeldt said.

City officials say that residents are doing a great job conserving water and to keep it up. They're going to work to find the right balance.

Crews usually flush the hydrants once a year. They were trying to wait for a year and a half this time but found it was a little too long.
Related topics:
mountain viewwaterwater conservationflushingdrought
Copyright © 2021 KGO-TV. All Rights Reserved.
More Videos
From CNN Newsource affiliates
TOP STORIES