KGO
By Wayne Freedman
NAPA, Calif. (KGO) -- There's yet more heartache as part of a hazing scandal with the Napa High School football team. The school board now says that it may have to cancel the team's upcoming season.

At Napa's Memorial Football Stadium, there is a lock on the gate. But for Napa High football players and families, next year it may be locked figuratively as well.

"It's just incredible that they can make this decision for us and just kind of end all the plans we had," player Anton Venter Jr. said.

On Thursday night, the Napa Unified School Board announced it will cancel Napa High's upcoming season if it cannot hire a coach by June 15. Players may want to make other plans.

"This was information for them. Because if we don't have a coach by June 15, that means that we might put the safety of kids at risk," Board Communications Director Elizabeth Emmett said.

It's the latest development in a hazing scandal that has plagued the program since last fall. When the school board began expelling students and the district attorney began investigating, Coach Troy Mott and his entire staff resigned in mass.

As one of the coaches said on Friday on the condition of anonymity, "for them to pick a handful of guys as fall guys is not right. We will not go along with what is not morally right."

Parents said that much is at stake. "Most of our fundraising is done as a result of holding football games," Booster Club President Jean O'Donnell said.

For Venter, with a 4.4 GPA, there could be a lost college scholarship if he doesn't play. "I have worked hard to keep my GPA up to go to a good school with football," he said.

The district, meantime, says it intends to hire a coach.

"We have made offers. Those offers have been declined," Emmett said.

That's no surprise to the coach with whom ABC7 News spoke to on Friday. "Anyone who takes that job knows he would be walking into a nightmare. He would be thinking, if they did this to that staff, what would they do to me?"

#Napa DA has yet to announce charges against coaches or players for last fall’s hazing incident. #abc7now pic.twitter.com/pVuYEcuk8N

Anonymous #Napa HS Coach who quit in protest says Board is not likely to make a hire by 6/15. pic.twitter.com/bXDSXWkaA7

#Napa County DA has yet to file any formal hazing charges against players or coaches. #abc7now pic.twitter.com/zzSMHNu7uW

#napa district says w/out new head coach by 6/15, it will cancel 2017 season for this proud program. #abc7now pic.twitter.com/QKF0m6AyEj

Football at #Napa has been tainted by a hazing scandal since last fall. Coaches have quit in unison and protest. pic.twitter.com/0iajLlRc0X 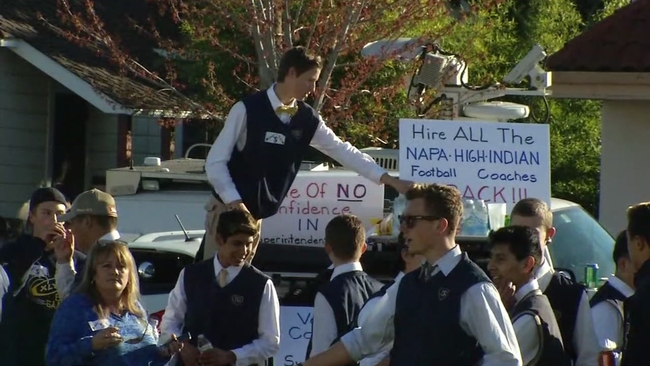