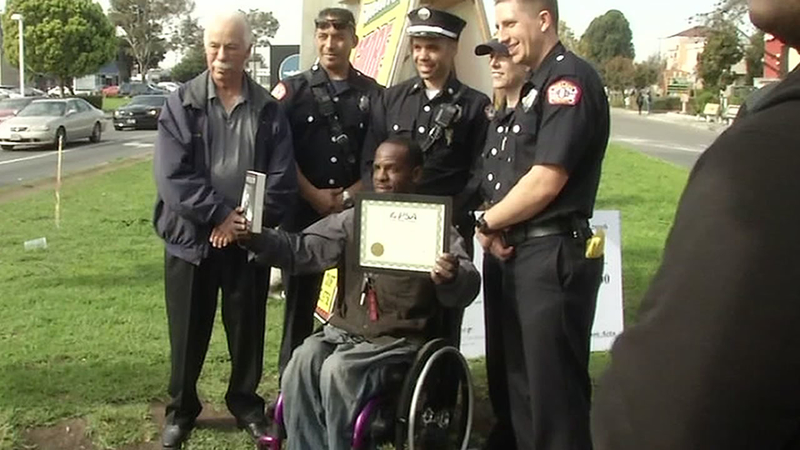 OAKLAND, Calif. (KGO) -- Members of the Oakland Fire Department and other city officials presented a man who was paralyzed after being shot with a check that will help change his life.

In the East Bay, what members of the Oakland Fire Department call, a random act of kindness is life-changing.

At the corner of Hegenberger and Edgewood in Oakland, you may have seen a man hanging out in a wheelchair and no doubt you've heard him, too. But chances are you don't know Quincy Carr by name or how he got there. "I'm sure they just see come crazy guy out here on the corner," he said.

However, employees at the Romo Furniture store, appreciate how much business Carr sends their way.

On Monday morning, Quincy received a surprise visit from Oakland Mayor Libby Schaaf and Captain Sully Sullenberger along with representatives of the Oakland fire and police departments. "I want this to be the start of him going back to where he was going in the first place," Oakland Police Department Sgt. Clay Burch said.

A few months ago, Burch was just another driver passing by, but he knew the backstory of a barbershop shooting that left Quincy paralyzed 10 years ago. "I got shot in the spine, the heart, my leg and two in the lungs," Quincy said.

It ruined Quincy's dream of becoming a commercial airline pilot and that touched Burch. "And as I got to learn more ab out him, I got ot know him more. I realized this guy should be doing bigger things," Burch said.

Now, he will thanks to Oakland firefighters and dignitaries who presented Quincey with a check for $10,000 that will pay the tuition at Pacific States Aviation, so he can train to become a flight instructor.