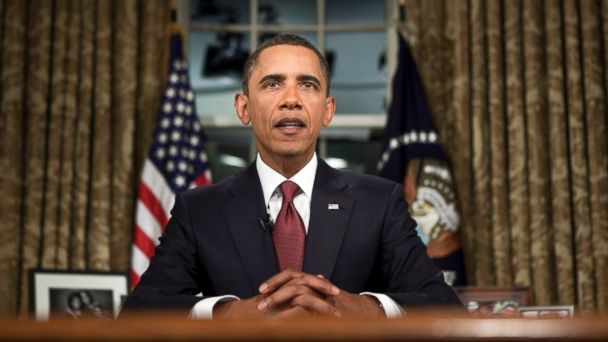 President Obama addressed the nation Sunday evening on the San Bernardino shooting saying: "It was an act of terrorism designed to kill innocent people."

It was Obama's third Oval Office speech as president, his first since announcing the end of U.S. combat operations in Iraq on Aug. 31, 2010.

Obama met with his national security team to receive an update Saturday morning on the San Bernardino shooting, reaffirming the FBI had not yet found any indication the two shooters were part of any larger international terror networks or cells.

According to the White House, the president was expected to discuss "the broader threat of terrorism, including the nature of the threat, how it has evolved, and how we will defeat it."

Pres. Obama: Terrorism is an "evolving threat" that the US will overcome: https://t.co/Nda2RSGHN6 pic.twitter.com/1zdXdClRtp

"Muslim Americans are our friends and neighbors, our coworkers, our sports heroes, our men and women in uniform." pic.twitter.com/6Hd2nA2q1o

Pres. Obama: "Let’s not forget that freedom is more powerful than fear." pic.twitter.com/zm3QEJjZdt

Pres. Obama: "The threat from terrorism is real, but we will overcome it." pic.twitter.com/FuR2nRe0JK