Officials confident they have bank robber in custody

KGO
SAN JOSE, Calif. (KGO) -- A construction area in San Jose was where a dramatic manhunt unfolded live on ABC7 News around 5 p.m. One of three men in a stolen car refused to go with police quietly.

San Jose police swarmed the area of Mission and 7th streets after spotting a stolen car with a high profile--a silver Chevrolet taken from a home in the Santa Cruz Mountains that happened to be an unmarked law enforcement vehicle.

Police had followed the car from downtown San Jose to an apartment complex.

Michael Bunell lives there. He says he heard a loud noise, went outside and encountered police. "They hailed me to come out past the gate, and with their weapons drawn at me," he said. "They told me to put my hands up, so of course I did."

He wasn't the man they were looking for.

Police say there were three people in the silver car. They took two into custody without incident, but the third man ran.

"I can't overstate the danger he posed to the people in that complex," said Captain Jason Dwyer of the San Jose police.

The suspect made his way from the apartment property to a neighboring construction site.

"They called us, told us to evacuate everyone on site," said Foreman Gerardo Medina. "Police are on site with guns, ready to shoot, get everybody out."

An officer deployed a taser at one point and the man was eventually taken into custody.

At the time, authorities didn't know for sure if the men were involved in Thursday's bank robbery in Scott's Valley, but they knew they had to be cautious.

"They were occupants of a stolen vehicle when we challenged them, attempted to arrest. He fled," said Dwyer. "When we attempted to take him into custody, he resisted." 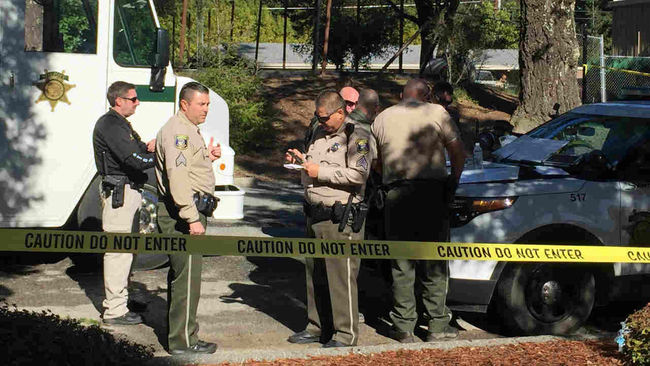