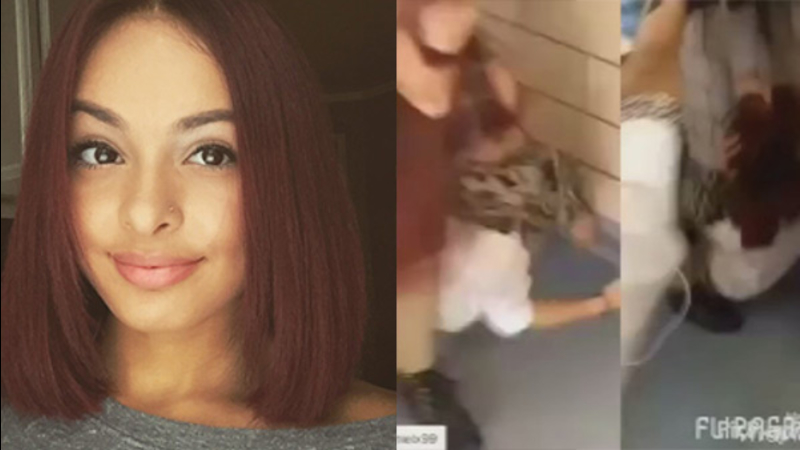 PHILADELPHIA -- A teenage girl beaten unconscious allegedly by a group of her peers decided to turn her pain into a passionate message.

The victim says a video of the incident posted on social media in an effort to humiliate and torment her.

She spoke exclusively with Action News.

"When I saw it, I was embarrassed because people were reposting and laughing about it. It just messed me up in my head," 16-year-old Mia DeJesus said.

But Mia decided to repost that video and use it to make a bold statement about bullying.

Mia made a powerful video about the incident that's gone viral on Facebook under the hashtag #teammia.

Mia, a sophomore at Northeast High School, says it was last Wednesday that she was viciously attacked by four other female students. They pummeled her over and over, even as she lost consciousness on the bathroom floor.

She had to be treated for several contusions.

Some of the girls then posted footage of the horrific beating on social media.

"I felt alone and feeling alone, a lot of people feel this way, and nobody really does anything about it," Mia said.

Mia and her mother Melinda decided to take a stand.

"Let's make a positive out of it and let's show what cowards that they are. They're not Instagram famous. Now they're famous for being cowards," Melinda said.

Mia made a powerful video about the incident that's gone viral on Facebook under the hashtag #teammia.

She says in the video:

I refuse to be held hostage by this video and my fear. I will not be a victim. I will post this video every day until something is done for all the people who continue to experience this type of humiliation.

The video has been viewed two million times.

"All the people that have been texting me on Facebook and telling me their story, I feel like I did help a lot of people in the short amount of time that my video has been up," Mia said.

Concerning the attack, Philadelphia School District spokeswoman Raven Hill says, "We do not condone this behavior and appropriate action was taken against the four students...We would not characterize this as bullying, but rather a neighborhood dispute that spilled over in the school building."

The four students were given suspensions. One of the girls is being investigated by police for aggravated assault.

As for Mia, she is being transferred to another school.
Related topics:
pennsylvaniaviral videobullyingfacebookbeatingteenagersanti bullyingstudents
Copyright © 2021 WPVI-TV. All Rights Reserved.
More Videos
From CNN Newsource affiliates
TOP STORIES