KGO
By Laura Anthony
PITTSBURG, Calif. (KGO) -- An East Bay high school principal is speaking out Wednesday against allegations from a police chief that the principal was an active participant, and even incited a disruptive student protest last week.

It happened when students from Pittsburg High walked out last Thursday.

"One of our officers actually witnessed the school Principal (Todd) Whitmire actively involved in the protest," said Chief Allan Cantando of the Antioch Police department.

When asked if he participated, the principal said he did not.

Cantando says it's one thing to have hundreds of students marching, it's another when it appears a school principal is right there with them and, in Cantando's view, crossing the line.

"He was mouthing the words they were saying, expletives toward President-elect Trump, and fist-pumping," said Cantando.

Principal Whitmire told us he was there when a couple hundred of his students turned a lunchtime rally into a walkout last Thursday, but only to keep them safe.

"If I'm expecting them to act a certain way, then I certainly need to act that way as well," Whitmire said. "So absolutely not, the use of profanity, of any type of language or any type of motions that would encourage them."

The students marched four miles from Pittsburg to Antioch High.

Along the way, a window was shattered at a Subway restaurant. Garbage cans were turned over and one student allegedly threw an orange at an Antioch police officer.

"From everything I've looked at, I really support the principal and all the staff's actions that they did to really step in and mitigate that situation," said Janet Schulze of Pittsburg.

RELATED: SJ teacher allegedly says students can be deported for not standing for anthem 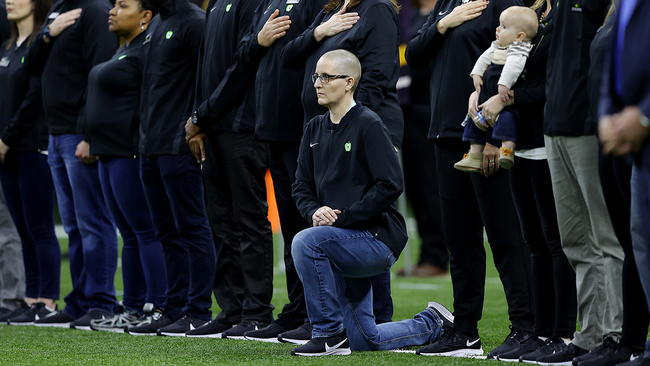