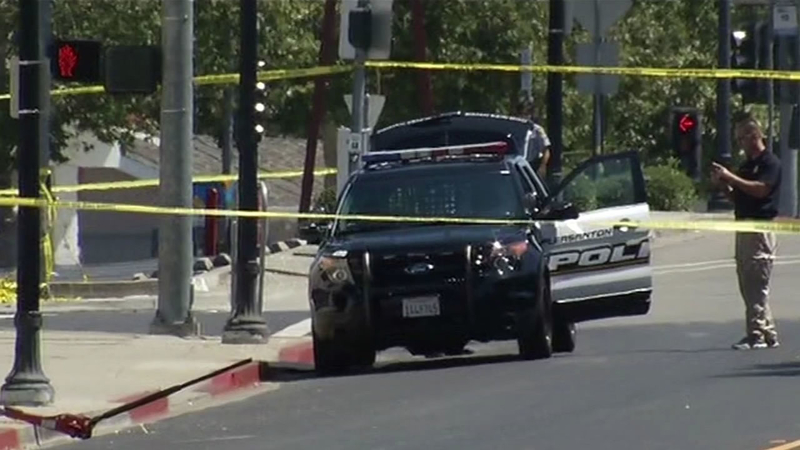 PLEASANTON, Calif. -- A burglary suspect was fatally shot during an altercation with a police officer in Pleasanton early Sunday morning, according to police.

Just after 2 a.m. officers were dispatched to Specialty Sales Classics, a car dealership located at 4321 First Street, on reports of a burglary alarm activation.

On arrival, officers found a man in front of the business "acting agitated and aggressive." The suspect refused to comply with the officer's commands and fled into the car dealership, according to police.

Shortly after that he exited the car dealership through a broken window at the back of the building and fled on foot, police said.

One of the officers chased him. An altercation ensued, during which the officer fired his sidearm and struck the suspect, according to police. He was transported to Eden Medical Center where he was later pronounced dead.

The officer suffered minor injuries. He was treated at Valley Care Hospital and subsequently released. The officer's name is not currently being released, according to police.

The Alameda County Coroner's Office is assisting in the investigation by identifying the suspect, police said.

Meanwhile, Specialty Sales Classics salesman Jeremy Bolen says the hood of a 1967 Mustang was scrawled on with a sharpie. The suspect even walked on a Cadillac worth $115,000. "You can't repaint this," explained ."

"There's a bunch of other damage. Graffiti in the bathroom," he added.

Surveillance video is now in the hands of Pleasanton police. The manager says it documents the suspect moving around the show room for 40 minutes and police entering with rifles.