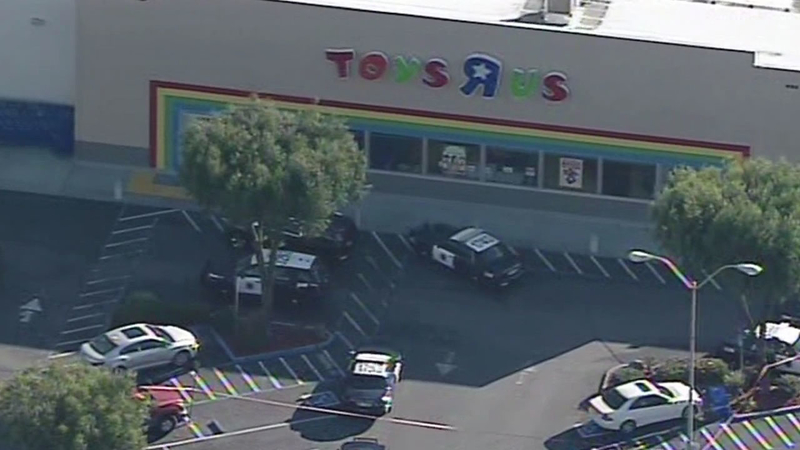 The incident began when San Jose police responded to a call from a man who reported an SUV had been stolen from the Pump It Up Kids Zone parking lot. Police tried to stop the stolen car at Blossom Hill Road and Almaden Expressway, but the suspect took off in the stolen SUV and rammed into at least three other vehicles on the roadway.

A friend of the victim, whose car was stolen, says they used an app to track the stolen iPads that were inside the stolen car.

"As it continued forward, it struck a marked San Jose police officer's vehicle as well. Shots were fired in the direction of the suspect vehicle," San Jose police Officer Albert Morales said.

This was one of the vehicles hit earlier. Family very shaken up, but thankful they weren't seriously hurt. #SanJose pic.twitter.com/kYTK3l6CXJ

The suspect dumped the bullet-riddled suburban outside the Toys "R" Us store and ran into the store to hide.

"I saw it just speeding this parking lot recklessly, police behind it, and by the time I came around it was pulled up in the front," one witness said.

Many people inside the store were stunned.

"I was just trying to help out, just telling people, 'Let's go, let's leave the building, there's an emergency,' and everybody looked confused, they didn't know what was going on," another witness said. "When we finally got out, I think that's where reality finally hit everybody. They caught him, brought him out, and I was watching the whole thing and apparently, it looked like he'd been shot in the rib cage."

Police have not confirmed whether the suspect was shot, but he was taken to a local hospital with unknown injuries.

With a store full of customers, people were scared.

"I wouldn't expect this at a children's toy store, definitely not a crime like this, not here," Toys "R" Us customer Jahnae Zappel said.

"If I was here at the time, I'd be scared, totally. But I would still be scared for the people in there, especially the customers, the kids," Toys R Us cashier Rosa Zaragoza said.

No one inside of the store was hurt, but police did warn the boyfriend of the woman whose car was stolen to stay away. He was the one originally following the suspect through a tracking app.

The store reopened just after 6 p.m. and shoppers said they were thankful for the quick response by police.