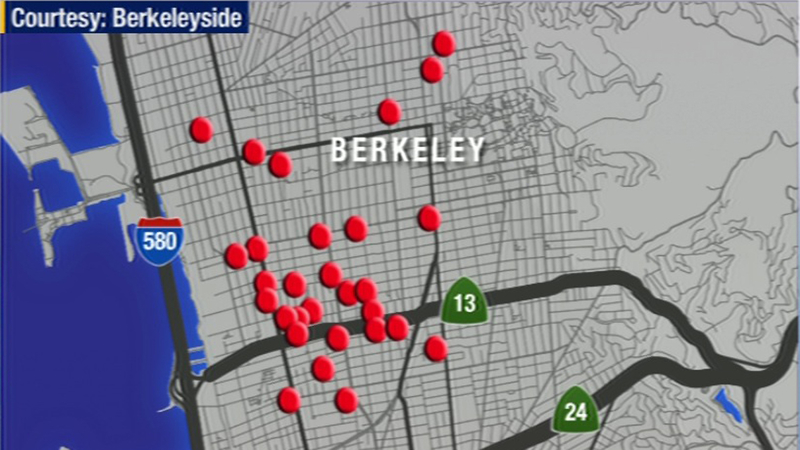 BERKELEY, Calif. (KGO) -- Berkeley residents are no strangers to disturbances, but a recent phenomenon has them baffled and concerned.

Loud booming sounds have been happening at night and police have few leads. While it was causing a lot of speculation at first, neighbors now say they just want the noise to stop.

"Last night, there was this loud boom. And it's so loud that the direction is lost, you just feel it," Berkeley resident Edna Gurley said.

Most of the people hearing it say it happens between 8 p.m. and 10 p.m.

"It sounded like a firework. We actually saw kind of a flash outside of our window," resident Joshua Buswell-Charkow said.

The loud noise has been startling babies, pets and setting off car alarms.

"It's really scary. My son was asleep and so my first concern was that he was going to wake up," Buswell-Charkow said.

At first, the "Berkeley boom" became a source of chatter on Twitter, with people speculating what it could be. But now neighbors are at the point of frustration.

Anybody check the Cal cannon to make sure it's still where it's supposed to be? #berkeleyboom

#BerkeleyBoom 9:50 -- that one sounded like a Civil War cannon.

It's been about a month and there seems to be no end to the disturbance.

Police are getting its fair share of calls. They say, mostly likely, it's a homemade explosive to blame.

"At this point, it looks like it may some type of firework device. We're not positive, but we're doing some work to figure out maybe exactly where in the city these are happening at," Berkeley Police Department's Jennifer Coats said.

"If they are watching, I would really ask you to stop. It's keeping us up at night and it's scary for my child," Buswell-Charkow said.

It's not just Berkeley where people are hearing the boom. Neighbors in parts of Oakland and Emeryville have reported hearing it as well.

I might have heard the #berkeleyboom tonight in Emeryville... Weird.