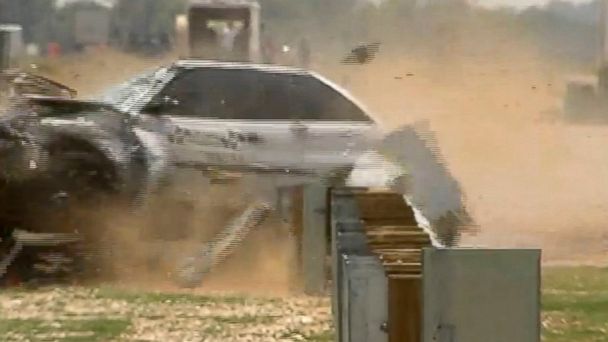 MARSHALL, Texas -- During dramatic court testimony today, the end terminal of a guard rail system was shown repeatedly failing in crash test videos that were never turned over to the U.S. government.

The videos, produced between 2005 and 2006 by Texas-based guardrail maker Trinity Industries, show cars ramming into what a company executive said was an "experimental" configuration of its ET-Plus guardrail system.

In five tests done with small passenger cars, plaintiffs in the case against Trinity say that rather than absorbing the impact as the guardrail is designed to do, the metal structures failed, in two cases causing the car to roll over and in another apparently impaling the vehicle.

The ET-Plus system was the subject of an ABC News "20/20" investigation in September that looked into allegations that slight changes to the guardrail end terminal made in 2005 without the government's knowledge made the guardrails hazardous if hit from the front. Rather than buckling and ribboning out to absorb the impact of the vehicle, in some crashes the guardrail locked up and sliced straight through the car, severing motorists' limbs.

According to an internal Trinity email obtained by ABC News, one change, reducing a piece of metal in the guardrail head piece from five inches to four, would also save the company $2 per guardrail - some $50,000 per year.

In testimony Tuesday, Trinity Industries Vice President of International Sales Brian Smith stressed that while the crash tests shown in the video today were done with the modified four-inch ET-Plus, they were only part of a research and development project that focused on what they say was a different way to install the guardrail - a change that never went into production. Trinity maintains that because the project was never marketed or submitted to the government for approval, it was not necessary to turn the crash test video over to the Federal Highway Administration.

Plaintiffs say the tests show the modified end terminal failing, as motorists have alleged has happened in the real world with the four-inch ET Plus terminals on the road today.

The trial that began Monday in Marshall, Texas and is meant to decide a federal suit brought against Trinity Industries of Texas by Joshua Harman, a competitor who claims the company defrauded the government when it sought for, and was granted approval to sell its ET-Plus guardrail end terminal to state departments of transportation without disclosing all of the design changes it had made. The federal government has chosen to not participate in this case.

Trinity told ABC News for a previous report it has a "high degree of confidence in the performance and integrity of the ET-Plus System" that is on the roads and noted that the Federal Highway Administration has repeatedly accepted the non-experimental ET-Plus System for eligibility on the nation's highways. The company says design changes featured in the ABC News investigation were made to enhance performance of the ET-Plus and not to save money.

When questions were raised by the FHWA about the modified guardrails, Trinity turned over videos of other crash tests it had done on the system in 2005 and 2010, which the company says show the guardrails functioning properly.

Still, Tuesday Virginia became the fourth state to raise questions about the safety of the modified guardrail, following Missouri, Massachusetts and Nevada, which all have suspended use of the new guardrail while they conduct further safety reviews.

In response to the announcements from Massachusetts and Missouri, Trinity stated it intends to work with the state departments of transportation to ensure they are "accurately informed regarding our product." Trinity has appealed Nevada's decision.