KGO
By by Elissa Harrington
OAKLAND, Calif. (KGO) -- Black Lives Matter protesters are spending the night outside the Oakland police union headquarters, some are chained to the building.

Protesters chained themselves to the doors of the Oakland Police Officers' Association Wednesday night. Some secured U-locks around their necks. One demonstrator said this symbolizes how the black community feels.
"We are physically changed as well as metaphorically when we are trying to find jobs. And the continual racism and discrimination we face by just being black, as well as trying to find housing," said protester Frangy Poto.

The group took over the police union headquarters and credit union, posting signs that say, "Black Lives Matter."
They want the city to stop funding the police department, and instead use that money to invest in black futures.

"We want 50 percent of the of police department funds to go the black community. Specifically, to mental health services, as well as housing, because what's happening is a lot of black people have been displaced," Potos said.

Police were there monitoring the crowd. Protesters say they plan to stay though the night. 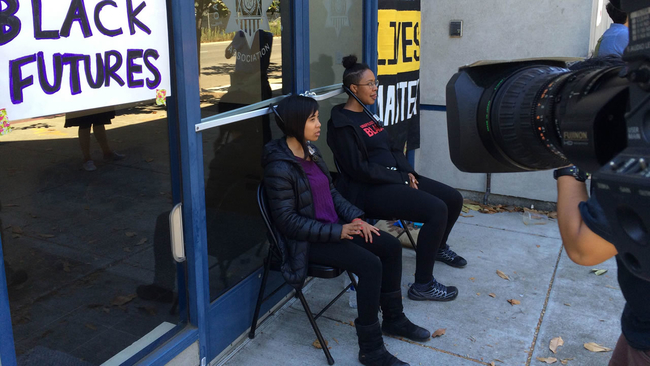