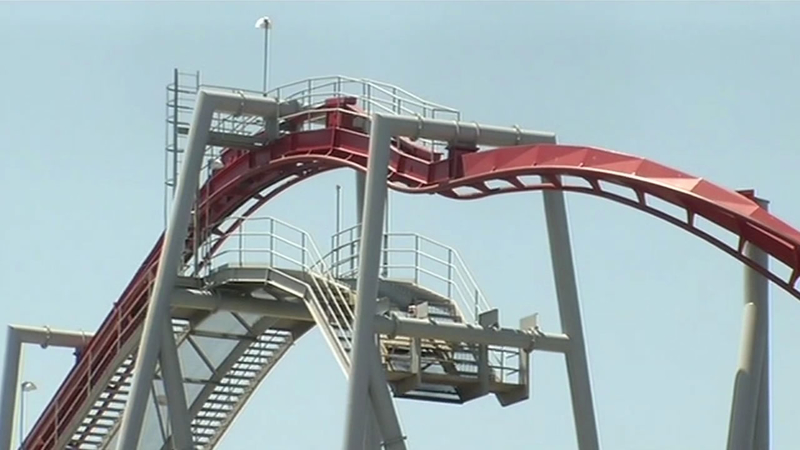 A park employee was hospitalized for traumatic injuries after being struck by a train returning to the station of the Flight Deck coaster, park officials said in a statement.

Witnesses say the park employee stepped into the path of the roller coaster while trying to retrieve a rider's cellphone.

A guest riding the roller coaster at the time reported a hand injury and was taken to a hospital for evaluation. Further details about the accident and the injuries were not immediately available.

The roller coaster will remain closed until the investigation is complete. Park officials said there was no reason to believe the ride malfunctioned, but that they are working closely with local and state authorities.

"It was the maintenance guy, he was trying to get something from the floor, I think somebody dropped a cellphone and then when we were turning to the right, I saw the maintenance guy getting hit by front of the first line of the Flight Deck. He got dragged almost like 10 to 15 feet from the entrance almost to the exit," Gustavo Ceja said.

"It makes me not want to ride the roller coaster, it really does," one man said.

Great America management released a statement saying: Safety is at the heart of everything we do and remains our highest priority. We are working closely with local and state authorities to investigate this matter."

In 1998, there was another accident on the same roller coaster which used to be called Top Gun.

Renato Robles was killed when he climbed over a security fence to get his wife's hat and was kicked in the head by a rider.

Friday's accident occurred the same day a 10-year-old girl was airlifted to a hospital when she was found unconscious after riding a roller coaster at Six Flags Magic Mountain in Southern California.

The girl and a parent were transported by helicopter Friday afternoon, the Los Angeles County Fire Department said. There was no word Saturday on her condition or whether it's related to the ride.

The girl was found breathing but unconscious after riding the Revolution, according to a statement from the amusement park in Valencia.

The children were among numerous carnival-goers on the "Dragon Wagon" ride when it came apart Friday evening, New England Cable News reported. One of the young victims was taken to a hospital.

The cause of Friday's accident remains under investigation.