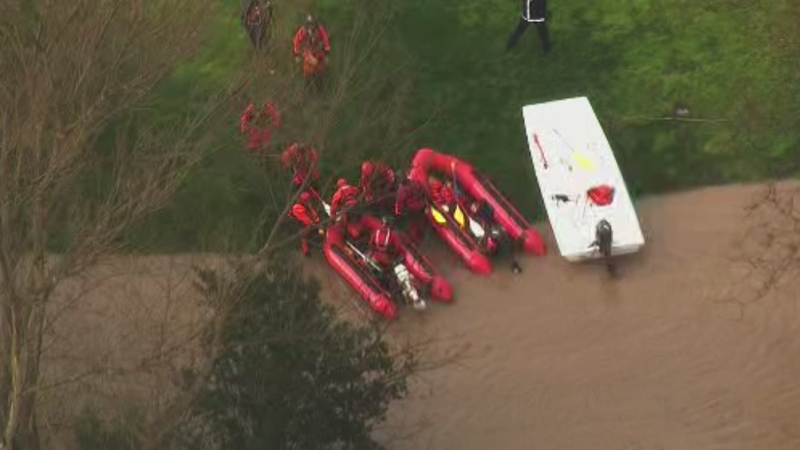 It was a full-scale water rescue after reports of possibly 20 people stranded in Coyote Creek.

"Our tent sunk in the water and we just got out in time," said Sal Orinda , who was rescued. "We were on the side, we were climbing up the hill. Water was right below us," said another, Kimberly Ortiz.

Orinda, Ortiz, and three other homeless people were rescued from the rising creek waters near Los Lobos Golf Course.

The San Jose Urban Rescue task force scoured the area near the creek for nearly two hours. "All of the water in the Coyote Creek watershed right now is dangerous. It's swift-moving, it's carrying debris with it from areas that haven't seen water in years. And on top of that, it may be contaminated," SJFD Capt. Mitch Matlow said.

This rescue is the second this week. City officials say they advised people living in the homeless encampments to leave the area prior to this rainy winter season.

"We have had people doing outreach since the beginning of this wet winter, telling people to move their encampments away from the water ways," Matlow said.

Some people who live along the creek knew the risk but had nowhere to go. "This is our home right now, so hopefully we find another place to go," Orinda said.

It's not clear if everybody stranded got out. The search is called off but emergency officials will continue to check the area and warn people against setting up tents so close to the rising creek.