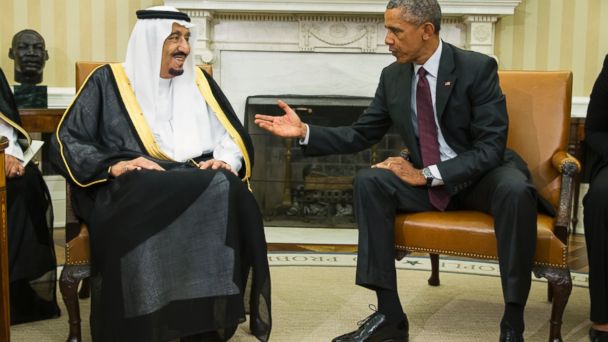 The two leaders' meeting comes as Gulf nations fear the Iran nuclear agreement will destabilize the region through the lifting of sanctions.

Despite those misgivings, a summary of the meeting provided by the White House said clearly that the king told the president he approves of the agreement.

"King Salman expressed his support for the Joint Comprehensive Plan of Action (JCPOA) between Iran and the P5 + 1 countries, which once fully implemented will prevent Iran from obtaining a nuclear weapon and thereby enhance security in the region," the White House account of the conversation said.

The two also discussed the fight against ISIS, the humanitarian crisis in Yemen, which shares a border with Saudi Arabia, and the Israeli-Palestinian conflict.

In a rare move and show of respect, Obama greeted the Arab leader at his car in front of the West Wing.

Before their meeting began, Obama commented on their plans to discuss the implementation of the nuclear deal, as well as ways to resolve conflicts in Syria.

"This is obviously a challenging time in world affairs, particularly in the Middle East," Obama said seated next to King Salman in the Oval Office. "We share a concern about Yemen and the need to restore a functioning government that is inclusive and can relieve the humanitarian situation there. We share concerns about the crisis in Syria and will have the opportunity to discuss how we can run a political transition process within Syria and how we can finally end the horrific situation there."

Saudi Arabia has received criticism for refusing to accept any Syrian refugees, as the flood of migrants try to move across and into Europe.

"We continue to cooperate extremely closely in countering terrorism activities in the region and around the world, including our battle against ISIL," Obama added, using the term for the militant group also known as ISIS. "And we'll discuss the importance of an effectively implementing the deal to ensure Iran does not have a nuclear weapon while counteracting its destabilizing activities in the region."

The White House has received enough support for the deal in Congress to provide veto-protection for the president.

King Salman echoed Obama's concerns, and while not directly addressing the Syrian crisis or the Iran nuclear deal, he did call for stability in the region and the importance of cooperating with the U.S. to achieve it.

"We want to work together for world peace," he said through a translator. "Our region must achieve stability, which is essential for the prosperity of its people, and in our country, thank God we are prosperous, but we want prosperity for the entire region. We are willing to cooperate with you in order to achieve that."

The United States has recently ramped up sales of military equipment to Saudi Arabia, including a $1-billion arms deal the Pentagon in expected to approve soon for munitions and additional support over several years.

Obama last met with the Saudi royals in January, cutting his trip to India short to attend the funeral of Saudi King Abdullah bin Abdul-Aziz, the half-brother of the current king.