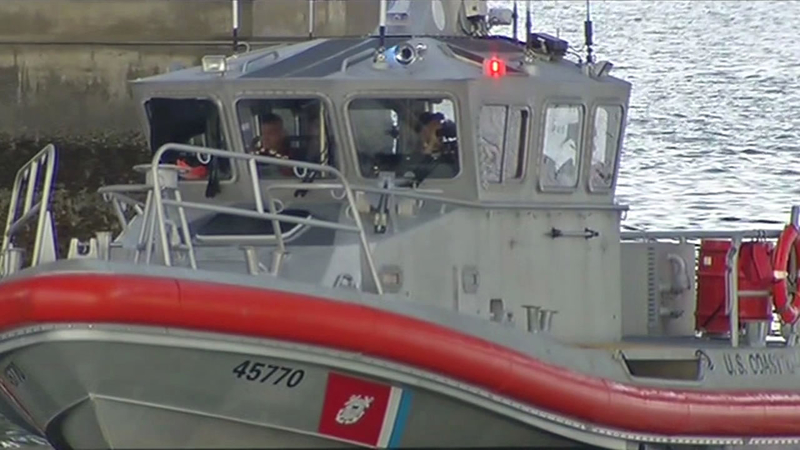 SAN FRANCISCO BAY, Calif. (KGO) -- It was a wild morning for search teams and the CHP who were out Wednesday morning trying to find a woman who either fell or jumped into San Francisco Bay from the Bay Bridge. The search was called off after six hours.

The CHP confirms that the car the woman was driving was stolen out of Los Angeles. The driver has not been found, but her ID was recovered in the water. The CHP is now heading to the East Bay address on that ID to try and follow up with the woman to first see if she's okay, and then to find out what her involvement is with the stolen car.

Could you survive a jump from the Bay Bridge? The CHP is looking for a woman who jumped/fell after a crashing a stolen car!

Around 2:30 a.m. the U.S. Coast Guard started its frantic search. The goal was to find the woman alive in the frigid waters.

"The water's cold enough to potentially cause hypothermia," said Jordan Akiyama with the Coast Guard.

The Coast Guard's helicopter searched by air and boat crews circled around the bay while CHP officers searched by foot.

Other agencies also deployed boats looking for any signs of life along the waterfront and Yerba Buena Island.

"The biggest challenge when you're doing a search is dealing with elements," Akiyama said. "So of course it was night time, also you have to account for the tide and the way the water drifts."

Breaking: officials searching for woman who dropped 70 feet below into the frigid waters on bay bridge pic.twitter.com/aA73EwyNeC

All of that makes it hard to spot someone in the San Francisco Bay. The rescue mission was called off after six hours.

In the meantime, the CHP is investigating what led to the single car crash on the eastern span of the Bay Bridge. There were three people in the car. When officers tried to talk to them near the crash site, they say that's when the woman went plunging 70 feet below.

"We believe the driver jumped over the rail and was holding from the railing and as the officer was about 50 yards away she began to slip and fall," said CHP Sgt. Reginald Gayles.

Two passengers who were in the crash were detained and questioned by CHP but they were later released because officers said they didn't have enough evidence to charge them in the stolen car case.

The CHP is also following up on a report that a witness saw a woman get out of the water and hitch a ride in a dump truck.

Did you see a woman walking soaking wet along the shore by the Bay Bridge? CHP says she jumped or fell 75 ft into the bay after a car crash.

Search ongoing three and half hours since the woman first jumped into water from the bay bridge. pic.twitter.com/fQTY4qxoMt

Boats with flashing lights cont to search for woman who jumped over guard rail into water on bay bridge pic.twitter.com/LPvV8xvaGd