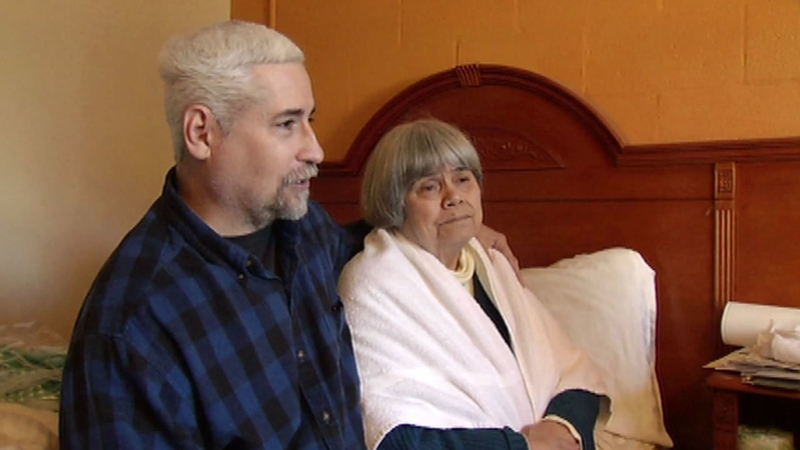 SOUTH SAN FRANCISCO, Calif. (KGO) -- For a senior citizen and her son who takes care of her, their future may be either a shelter or the streets. It's a hard reality for many who live on the peninsula where rents have skyrocketed.

Ramona Low is 80 years old and her caretaker-son Steve Litton live in a small motel room and it is their only salvation from homelessness.

"We're fearful that we're going to be thrown out on the street. Absolutely," Litton said.

Sad case of trying to find affordable housing on Peninsula... Couple falling through the cracks of safety net. pic.twitter.com/epSXdv6qCV

Low is crippled with severe arthritis and Litton also has disabilities. The two were evicted from an apartment they had lived in for two decades, after a dispute with their landlord. Low used to work for the city of San Francisco. They live on her modest pension and social security disability, but it is not enough to find an apartment on the peninsula.

"I think it's because of the booming economy. You have to have three times the rent just to get into any commercial housing," Litton said.

Now, they're two weeks behind in their motel rent. They've reached out for help from social service agencies with little success. Their church, they say, is their savior.

"Every time we go to Bible study on Wednesday, somebody puts something in my hand and says 'Buy food,'" Low said.

That's how they can eat. Their food in the tiny motel refrigerator is mostly donated, just like their Thanksgiving dinner this year. The Stulbarg Family from Redwood City learned about their plight and brought dinner to them.

"We were very fortunate and blessed to all be together," Andy Stulbarg said. "And I decided I wanted to try to do something for this family."

"I worked hard all my life. I'd like to live in my own little apartment. That's all I want," Low said.

It is a wish that's hard to fulfill when the average rent for a one bedroom on the peninsula is more than $2,500 a month.
Related topics:
south san franciscopovertyhomelesshousingchurchevictionrentsaffordable housingrenters
Copyright © 2021 KGO-TV. All Rights Reserved.
More Videos
From CNN Newsource affiliates
TOP STORIES