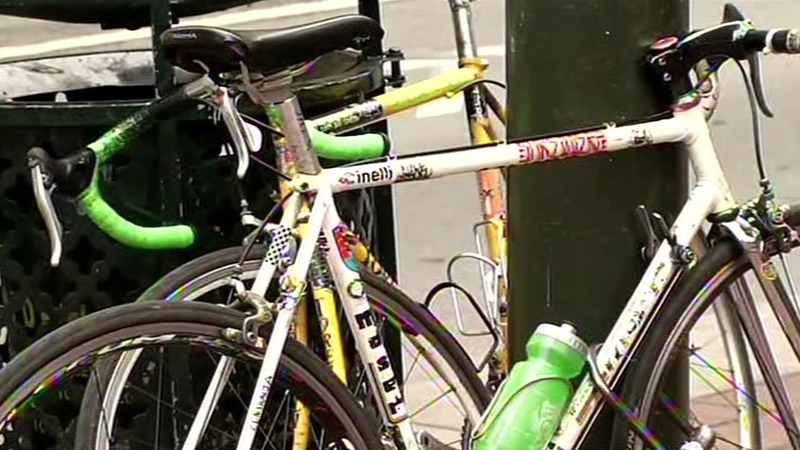 SAN FRANCISCO (KGO) -- Many know how frustrating, expensive, and even debilitating, it is when someone steals your car. The same is true for those who depend on their bicycles to make a living and their transportation is in the cross-hairs of thieves in San Francisco.

During rush hour on Market Street there's usually a blend of pedestrians, cars and of course, bicycles, all making their ways home. Bike riders in particular have more than safety to worry about. There's also theft.

If you ride a bike in San Francisco it's a matter of being the hunted or the prey.

Phillip Blakemore has been working as a bike messenger for 30 years. The Internet has taken jobs from bike messengers and thieves are after their bikes.

"It's a hard life," Blakemore said. "Oh yes, it is getting worse. People are desperate. People got their addictions and they like to prey on people like use."

Bike thieves are operating in the open, as ABC7 News documented earlier this month when the I-team took a hidden camera into a chop shop and bought an expensive bike for $60. ABC7 News was never able to find the owner because he or she had never registered it at sfbikes.org, leaving police unable to act.

"They need proof. And a lot of the times the bike's parts are taken off. They are painted over," said Morgan St. Clair, who runs bike registration and recover for the city.

"About 800 bikes were reported stolen last year, but the estimate is around 4,000 because most people were not reporting them," St. Clair said.

Or they are taking the law into their own hands. Blakemore recovered a stolen bike in front of the San Francisco Main Public Library last month because he confronted the thief with proof.

One small, unconventional victory, a rarity.