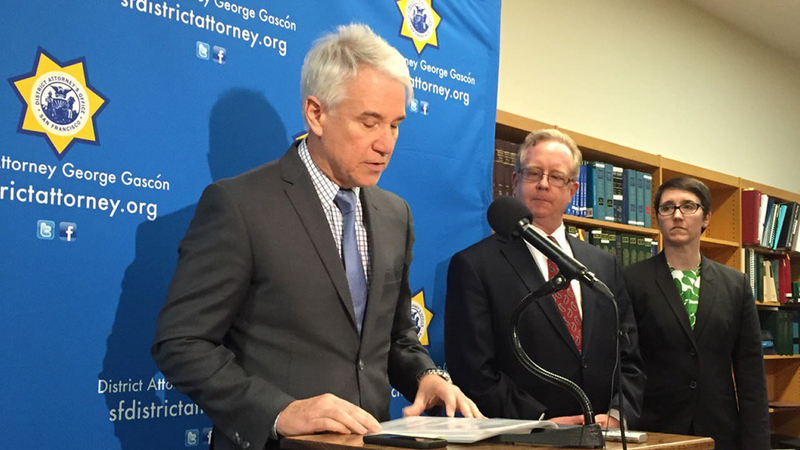 Gascon was joined by the FBI in announcing the filing of felony and misdemeanor charges against three former and current San Francisco Sheriff's Department deputies in connection with the jail house "fight club," where deputies allegedly ordered inmates to fight each other against their will.

"These are serious crimes that damage the moral authority of law enforcement," said District Attorney George Gascon. "Subjecting inmates who are in the care and custody of the state to degrading and inhumane treatment makes a mockery of our justice system and undermines any efforts towards rehabilitation."

"These charges represent our commitment to aggressively investigate misuses of power and breaches of public trust," said Special Agent in Charge David J. Johnson. "We, in conjunction with our law enforcement partners, will continue to seek out injustices such as these and hold those entrusted with upholding and enforcing the law to the highest standard."

According to court documents, on March 5, 2015, former Deputy Scott Neu forced county jail inmates Ricardo Palakiko-Garcia and Stanley Harris to fight each other on the seventh floor of the County Jail at 850 Bryant Street.

Neu allegedly told Garcia, who is 150 pounds, and Harris, who is 350 pounds, that if they did not fight each other, Neu would handcuff them, mace or tase them, beat them, and send them to a different jail location that would carry fewer privileges.

The two inmates fought each other because they felt they had no choice.

"We called this sort of a Game of Thrones Gladiator Fight because it really was done for jest and they were betting money on a winner," said Public Defender Jeff Adachi

Over five months former Deputy Neu allegedly prepared the men for the fights.

Deputies Clifford Chiba and Eugene Jones are accused of looking the other way. DA Gascon referred to the deputies' actions as a "blue wall of silence."

"What I saw more of people not knowing what they were seeing, not understanding what was going on," she said.

She also said she didn't want to speculate without seeing the completed criminal report.

Back In 2006 Deputy Neu was accused of sexually assaulting three inmates.

"And yet this deputy was allowed to keep his job, and that says a lot about the culture," said Adachi.

Deputy Clifford Chiba was allegedly present during this forced fighting match, and failed to stop the fight from occurring, thereby failing to protect Garcia and Harris from harm or injury as he is required by law.

Deputy Chiba also allegedly later provided advice to one of the inmates about how to proceed in a subsequent round.

The next day, on March 6, 2015, former Deputy Neu is alleged to have again forced Garcia and Harris to fight each other.

Deputy Eugene Jones is alleged to have forced the two inmates to participate in this second fighting match.

Despite the fact that both inmates again initially refused to fight, they eventually fought each other because they thought they had no choice but to participate or be physically harmed by former Deputy Neu.

It is alleged that both Neu and Jones were present for that fight, and that both actively encouraged the inmates during the fight.

Between October 3, 2014 and March 25, 2015, former Deputy Neu is alleged to have repeatedly ordered Stanley Harris to perform push-ups and dips against his will. It is also alleged that Neu regularly forced Harris and other inmates to gamble for food, clean clothing, bedding, and other possessions while they were in the county jail.

Former Deputy Neu is charged with felonies for directing under color of authority the assaults on March 5 and March 6, 2015, and for issuing criminal threats against Garcia and Harris. He is also charged with misdemeanors for inflicting cruel and unusual punishment on Garcia and Harris, and for inhumanity against the inmates in his care. If convicted, he faces more than 10 years in state prison and disqualification from holding any office in the state.

Deputy Jones is charged with felonies for directing under color of authority the assaults on March 6, 2015. He is also charged with misdemeanors for inflicting cruel and unusual punishment on Garcia and Harris, and for willfully failing to perform an official duty. If convicted, he faces up to fives in jail.

Deputy Chiba is charged with misdemeanors for inflicting cruel and unusual punishment on Garcia and Harris, and for willfully failing to perform an official duty. He faces more than one year in county jail if convicted. Chiba turned himself in Tuesday afternoon.