An animation was released on Wednesday that recreated the incident that resulted in the death of Amilcar Perez-Lopez.

The DA's Office has a backlog of officer-involved shooting cases. This one took 771 days to complete. The law says officers have the right to discharge their weapon if they fear for their own lives or the lives of others, and that's what the DA says happened here.

Perez-Lopez was shot and killed in February 2015. He was allegedly involved in an altercation with another man named in the report only as "Abraham P."

Plainclothes officers Eric Riboli and Craig Tiffe were first on the scene. The 3D animation, a time and distance analysis, starts from the time the two officers get out of their unmarked car at Folsom and 25th Street to the aftermath of the shooting.


"Different accounts surface regarding the source of the argument but all indicate that it started with an argument that resulted in Perez-Lopez facing Abraham P. with a knife," Gascon said.

Roboli says Perez-Lopez came toward him. Fearing for his life and that of his partner and Abraham, he says he discharged his firearm.

Tiffe says he thought Perez-Lopez was going after him so he fired.

Both officers say they yelled at him to drop his knife. Some witnesses say Perez-Lopez dropped his knife just before he was shot.

"The physical evidence is consistent with the knife still in Perez-Lopez's hand when he was shot," Gascon said.

A total of six shots were fired, five hitting Perez-Lopez in the back and one in the side.

A use of force expert hired by the DA's office says he could have been facing the officers when he was hit but the reaction time may have impacted the position of his body.

"Based on reaction time, Perez-Lopez would have been able to turn 90 to 180 degrees by the time the first bullet hit him," Gascon said. He says the vast majority of the physical evidence and eyewitness accounts do not contradict the officers' statements.

"The officers under the law are justified in using deadly force to protect others, in this case Abraham P., who was close by," he said.

"We have always anticipated that the district attorney would refuse to bring charges against the officers who killed Amilcar Perez Lopez. The long-awaited decision comes as no surprise. Rarely, if ever, do prosecutors bring charges against police officers in shooting cases. Instead, as Mr. Gascon did today, prosecutors will make every effort to give the officers the benefit of every doubt. For example, the inconsistencies in the officer's versions which the DA's report points out are deep and meaningful.

Yet, for Mr. Gascon, these inconsistencies are superficial and he is willing to overlook them. Such meaningful differences in the accounts given by co-defendants in a shooting would have doomed them both to being prosecuted and likely convicted. Unlike the prosecution of other shootings which do not involve police officers, prosecutors are eager to take on such cases. Here, because the killers were police officers, Mr. Gascon has shied away from his duty to do justice.

It takes courage and a true commitment to justice to take on the police. It's a shame that the District Attorney would not carry out his duty to impartially apply the law."

"Today, the San Francisco District Attorney's office announced that it will not be pressing charges against the officers involved in the 2015 shooting of Amilcar Perez-Lopez.

While the DA's decision makes it clear that the responding officers are not guilty of any crime, there is no doubt that this incident was tragic for everyone involved. It left a family to grieve for a loved one, and it forever changed the lives of the officers involved.

We cannot let this pain be a wedge between us. Instead, it should motivate us to work together as a community to prevent future tragedies from taking place. This means putting in place smart policies and introducing 21st century tools that will protect both the public and police officers.

It is through collaboration, not conflict, that progress will be made." 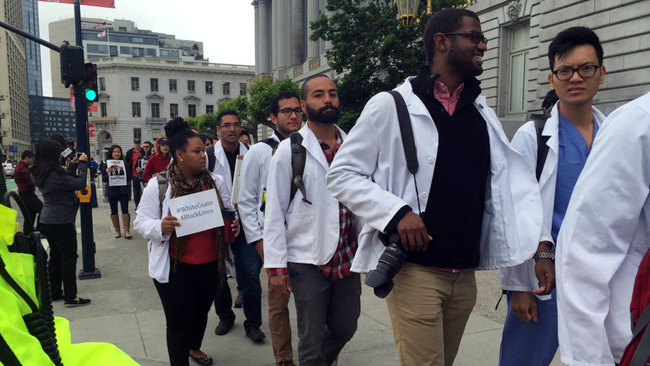