Bay City News
SAN FRANCISCO -- Students from several San Francisco high schools walked out of class today and are marching around the city in protest of the election of Donald Trump as the next U.S. president.

More than 1,000 students left campuses across the city and marched toward Civic Center Plaza, according to the San Francisco Unified School District.

A large portion of the group of students then left the Civic Center area and were spotted downtown and along the Embarcadero late this morning.

San Francisco Municipal Railway spokesman Paul Rose said Muni service along Market Street has been re-routed to nearby Mission Street as a result of the protest.

SFUSD officials sent out a statement about the student walkout this morning.

"We recognize our students' right to free speech and understand their need to use it. The walkout this morning was not authorized by SFUSD staff," district officials said. "Per our standard protocol, we will be notifying families regarding their unexcused absence through our attendance system."


For full coverage on the presidential election, click here.

Students walk out of Galileo High, march to #SF City Hall to protest Trump. "This is my way of voting" says student. pic.twitter.com/2i8Xhy0tiS 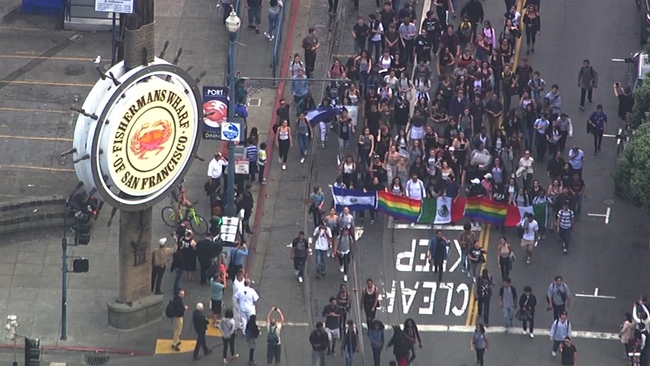