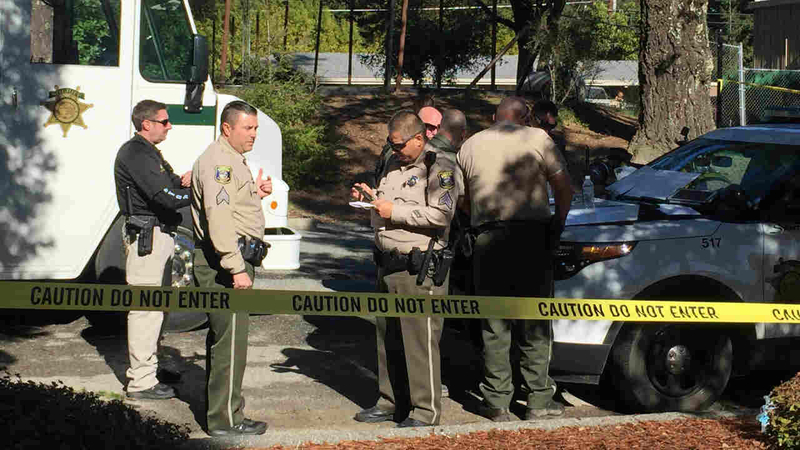 LOS GATOS, Calif. (KGO) -- Santa Clara County sheriff's deputies have been searching since this morning for a robbery suspect in the rural community of Redwood Estates, in the Santa Cruz Mountains.

The search started sometime before 10:50 a.m., which is when sheriff's officials locked down Lexington Elementary School, located off of state Highway 17 north of Redwood Estates. The school's principal was told to keep students inside, and parents were not being allowed to pick up their children before the lockdown was later lifted.

The CHP ordered the closure of Highway 17 because it's an active crime scene - specifically the northbound lanes where the suspect abandoned his vehicle at Redwood Estates after a traffic collision.

The manhunt continued, nearly eight hours after the robbery at a Bank of America branch in Scotts Valley.

Sheriff's deputies from Santa Clara County took the lead. The search area is in a heavily wooded area, and canine units have been brought in to track the scent of the suspect.

The robbery happened in Santa Cruz County, but police pursued the suspect on Highway 17. A Scotts Valley officer fired a number of rounds, but it's not known if the suspect was wounded.

Residents of Redwood Estates were ordered to shelter in place, and local schools were put in lockdown with the suspect at large.

The suspect is described as a male wearing a black jacket and dark jeans, sheriff's officials said. He was wearing a black mask at the time of the robbery, which originated in Santa Cruz County.

A suspect is seen robbing a bank in Santa Clara County on Thursday January 26, 2017.

The manhunt adds to the already tough month January has been for residents and commuters after storm-related slides forced closures.

The Santa Clara County Sheriff's office says the search will continue indefinitely. So that makes it impossible to pin down the earliest time anyone thinks Highway 17 can re-open, even in one direction.


SR17 still closed NB at Summit and SB at Bear Creek for police activity. Working on getting SB open as soon as possible.Patience appreciated

Traffic backed up Hwy 17 due to closure at Redwood Estates due to search for bank robbery suspect who shot at officer. #abc7now pic.twitter.com/Q3SgWhcTXY