KGO
By by Melanie Woodrow
SAN JOSE, Calif. (KGO) -- New information has been revealed about a disturbing message left inside the San Jose home of a murdered couple. Family members found the bodies of 59-year-old Golam and 57-year-old Shamima Rabbi on Sunday.

According to police, it was not a murder-suicide. They say they'd like to question the couple's oldest son but they have not been able to find him.

Condolences in the form of flowers line the couple's driveway.

#SJPD says they are unable to locate murdered couple's older son for questioning, not a suspect but may have info pic.twitter.com/IOeAkCPfTa

Friends say Golam and Shamima were peace loving and generous.

"So that's why it's so difficult to reconcile to the tragic, violent end to such simple, gentle souls," said Hasan Rahim with the Evergreen Islamic Center.

Friends and family members found the couple's bodies Sunday at the home on the 3000 block of Lucas Court. They entered the home through an open door after having not heard from the couple in days.

Whoever was in the house last left two disturbing messages.

A source says someone wrote in ink on the hardwood floor, "Sorry my first kill was clumsy."

And another note scrawled on the wall was directed to the couple's oldest son and included, "I can't be like you telling a lie. I can't love someone without telling them."

The note also said his mother begged for her life.

San Jose police say they have not been able to locate the couple's older son to question him. Detectives say he is not considered a suspect, but may have information regarding the incident.

Police say they were able to locate the couple's younger son.

The Rabbis were devoted members of the Evergreen Islamic Center.

"We are surprised that they are no longer with us and especially going away in such a manner is something we just can't come to grips with," said Faisal Yazadi with the center.

Golam was an engineer and Shamima an accountant.

San Jose police say the shooting does not appear to be a hate crime nor is the public in danger.

Anyone with information about the deaths is being asked to speak with either Detective Sgt. Pat Guire or Detective Ken Tran at (408) 277-5283. Callers who wish to remain anonymous can call Silicon Valley Crime Stoppers at (408) 947-7867.
Related topics:
san josecrimesjpdmurderhomicide investigationhomicideshootinginvestigationdouble murder
Copyright © 2020 KGO-TV. All Rights Reserved.
RELATED 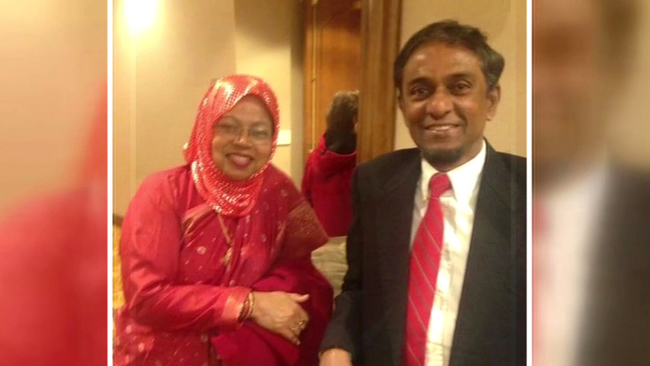