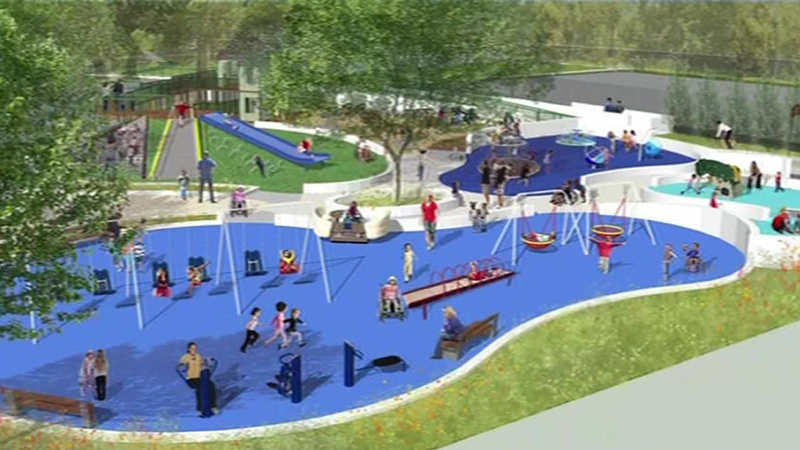 PALO ALTO, Calif. (KGO) -- A playground designed to include kids and adults with all types of special needs is being built in Palo Alto.

Hundreds of people attended a groundbreaking ceremony where city leaders spoke about the playground at Mitchell Park Monday morning.

The playground will have seven zones that visually impaired kids and adults will be able to navigate. First off, there will be no tanbark or sand limiting wheelchairs on the ground. There will be a two-story tree-house that's accessible by wheelchairs.

Retreat areas will be set up throughout for children with autism that get over stimulated by the traditional park experiences.

There will also be interactive music experiences and a kid-friendly stage complete with costumes.

Organizers say although you'll see wheelchair ramps at other parks that doesn't necessarily make them accessible to everyone.

"Really, 90 percent of people with disabilities have other disabilities besides being wheelchair users, so no parks have ever been designed with them in mind and we think it's time to create a community playground that includes the whole community," Magical Bridge Playground founder Olenka Villarreal said.

"For the kid it means that they get to have the same opportunities as every other child in their neighborhood and that's really meaningful and that sets them up for success," Abilities United spokesperson Sheraden Nicholau said.

The friends of the Magical Bridge Playground created a Youtube video and have raised $3.1 million for the park over the past five years, but still need an additional $300,000. Most of the money that has been raised has come from private donations. About $450,000 came from the city of Palo Alto and Santa Clara County.

The park is expected to go under construction starting next week and be completed by the end of the year.
Related topics:
palo altodisabilitychildrenspecial needs childrendisability issues
Copyright © 2021 KGO-TV. All Rights Reserved.
More Videos
From CNN Newsource affiliates
TOP STORIES