KGO
By by Melanie Woodrow
SUNNYVALE, Calif. (KGO) -- Sunnyvale police are searching for a suspect in connection with a fatal officer-involved shooting. One man is dead and the other is still at large.

An 18-year veteran with Sunnyvale's Department of Public Safety shot one of the suspects, who was pronounced dead on the scene despite life-saving measures.

"Through the investigation, we have found a firearm next to his body and an additional firearm in the backpack that he was carrying," Ahearn said.

Ahearn said one was a loaded high capacity magazine and the other was a handgun.

"We don't know if the suspect fired at the officer or not. Again, that will be part of our investigation," Ahearn said.

Sunnyvale DPS officers do not have body cameras, according to Ahearn. He says the officers involved were not hurt.

"I was scared because I was alone," Motel 6 guest Andrea Lara said. "I just heard some gunshots and I looked out and then I saw a lot of police out here."

The search continued from the air and on the ground with officers and K-9 going door to door.

Sunnyvale DPS say they no longer believe the suspect is in the area but they will continue to search for him.

Detectives are continuing their investigation into the case and determine all of the facts surrounding the circumstances of what happened. Anyone with information related to this investigation can contact the Sunnyvale Department of Public Safety at (408) 730-7110.

@molbywongkenobi We conducted thorough searches, and we are confident the suspect is not where we searched. Have a good night! 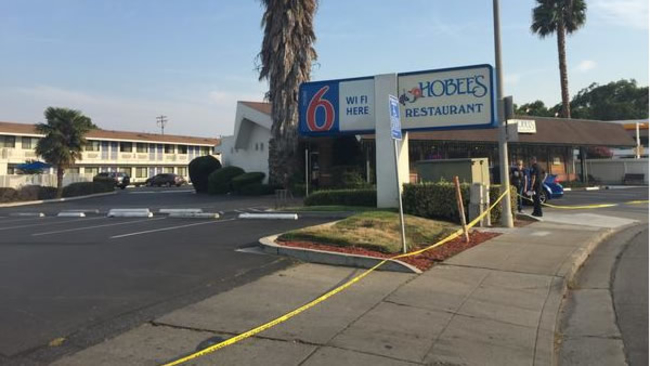