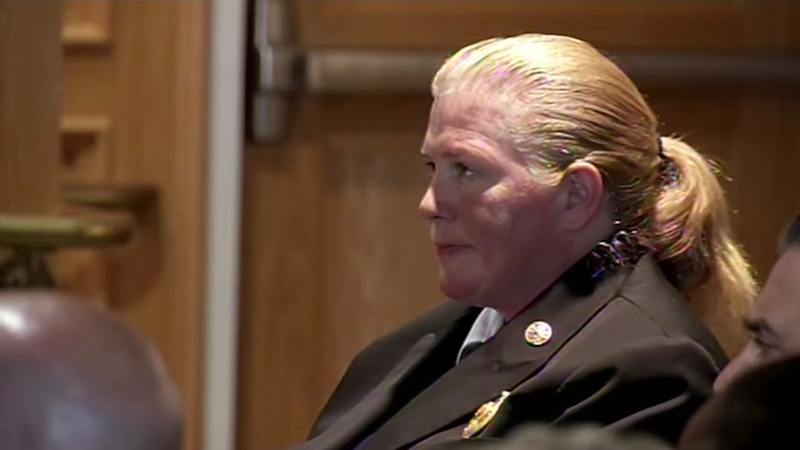 SAN FRANCISCO (KGO) -- The woman who runs the San Francisco Fire Department said Thursday night that she will survive a growing challenge to her authority. Joanne Hayes-White has been under fire from the inside. Her own department has turned against her and is calling for her to resign.

The San Francisco Fire Commission has the power to oust the fire chief and at Thursday's regularly scheduled meeting, her supporters came out and spoke about her strengths as a leader during the meeting's public comment portion.

San Francisco Police Chief Greg Suhr was the first to stand up for his longtime friend Joanne Hayes-White, followed by female city department heads and members of the Irish community, expressing support for one of their own.

"I want everybody to know what they've got. They've got a good chief," Suhr said.

"She has seen the department through tough times and tragedies and led through it all with grace, determination and professionalism," Kathleen Dowling McDonough, a supporter said.

But Hayes-White has lost the confidence of rank and file firefighters.

Even the leaders of the 250 women in the department joined with all the other employee groups for a confab in the mayor's office Wednesday, asking him to dismiss the first female chief in San Francisco history.

Adrienne Sim, a firefighter told ABC7 News that the problem with the current chief's leadership is her lack of communication. "Us not knowing where she's going. She hasn't been transparent letting us know her strategy or her plans," she said.

A crisis that has developed over time has reached a tipping point. Long waits for emergency medical service that firefighters say puts public safety at risk. They believe the chief should have fought hard and allocated funds more efficiently. She said she believes she's tried.

"Ask any department head if they are fully funded every year, and the answer is no, especially in the last five years," Hayes-White said. "We're in a rebuilding phase."

Mayor Ed Lee Thursday described his meeting Wednesday with union leaders as good but gave no indication what his decision about the chief might be.

"I'm not going to talk in public about any personnel matter," Lee said. "I've committed to working and having a number of meetings and getting to the bottom of their concerns."

Chief Hayes-White says she believes she will weather the storm.