Bay City News
FREMONT, Calif. -- Fremont police are picking through the rubble of an intense 24 hours that started Wednesday afternoon when a traffic stop led to two officers being shot, then an hours-long standoff at a nearby home and finally the shooting suspect dying as the home burned to the ground in a fire sparked by tear gas.

Police have arrested two other suspects who fled from the traffic stop at 1:33 p.m. Wednesday, but have not identified that man and woman or what charges they're facing. Only the man believed to have died in the fire, identified as 44-year-old San Jose resident Gerald Villabrille Jr., is suspected to have shot at the officers.

One of the wounded officers, a relatively new officer shot during the initial traffic stop, remains in critical condition, Fremont police Chief Richard Lucero said during a news conference today. The other, a detective with 10 years of experience shot about 10 minutes later, is in stable condition and recovering.

Lucero clarified today that the second officer had only been shot once after police reported Wednesday that he was shot twice.

The incident began at 1:33 p.m. Wednesday when the first officer stopped a reported stolen truck on Fremont Boulevard near Washington Boulevard. Lucero confirmed today that the truck had been reported stolen, but didn't know if the officer knew that at the time he pulled it over.

After the truck pulled over, the driver backed into a patrol car and there was an exchange of gunfire, critically wounding the first officer.

The driver pulled forward again and three people ran from the traffic stop. Police chased the gunman through a nearby store and caught up with him about 10 minutes later in a backyard of a home on Roberts Avenue. Gunfire was exchanged again and the detective was injured.

Officers then cleared the area and asked residents within a one-mile radius to shelter in place, announcing the order by phone. Hundreds of law enforcement officers from two-dozen area agencies swarmed the neighborhood to search for the suspects. SWAT teams searched door-to-door and yard-to-yard. Helicopters and drones searched for the suspects by air.

At about 11:15 p.m. the team concluded that the suspect was hiding in the same house where the second shooting had happened in the backyard after he got inside by shooting out the locks of the back door. SWAT teams surrounded the home and officers made attempts to communicate with him over a loudspeaker, but he didn't answer, so they shot tear gas into the house.

The barricaded suspect then called 911 and told the officers he had a woman hostage. While the officers had accounted for the home's residents, they paused to review all their evidence and ensure that there was not a hostage inside.

Meanwhile, they continued talking to the suspect, who told them he was armed and dangerous and potentially suicidal, according to Newark police Cmdr. Mike Carroll, who assisted in the tactical response.

The suspect again cut off negotiations, so officers used gas a second time in the early morning. This time, the gas ignited a small fire
inside the home.

Firefighters, working under cover of a SWAT team, tried to put the fire out, but were unable to go inside because the suspect remained barricaded. Police continued trying to negotiate his surrender, but he refused to come out, and eventually the home was consumed by flames and the officers lost contact with him again.

"They did, I thought, an incredible job trying to put out the fire," Carroll said of the firefighters.

By dawn the home had burned to the ground. Police found the suspect dead in a closet inside and the gun believed to have been used in the shootings elsewhere in the home. Fremont police identified the suspect as Villabrille but his exact cause of death has not been determined.

During the standoff residents were cleared from the surrounding houses and took shelter in the Fremont Senior Center, partially for fear that the suspect might have been outside the house hiding in tall weeds in the backyard.

The shelter in place order was lifted this morning and roads reopened in the area.

Investigators are still sifting through the burned home for evidence and to determine exactly how the fire started, but the extent of the damage means that processing the scene will take time. Police are also looking for ways to assist the family who not only had their home and all their possessions destroyed but their dog killed in the fire as well. A gofundme account has been set up to help with the family.

"The building was destroyed by the fire, processing of the scene is complex and it's made more difficult by all the surrounding circumstances," Lucero said.

Meanwhile the department members are reeling from the injury of their two officers, as they hope for the recovery of the officer who remains in critical condition.

"I am struck by the nobility of the actions of not only the officers involved in the incident but all of our field personnel," Lucero said. "We have a profound connection to the injured officers and their families and their well being so those thoughts are forefront in our mind."

#Breaking- Suspect in Fremont officer shootings is confirmed dead in house according to Fremont Fire. pic.twitter.com/0R6gixZ6e2

Huge fire at house where shooting suspect is barricaded in Fremont after tear gas was fired several times. pic.twitter.com/3vjCSUNf9M

All Fremont schools will be open. Standoff w/ officer shooting suspect confined to area near Roberts and Washington. pic.twitter.com/22E86q82pb

Series of explosions at Fremont house where shooting suspect is barricaded.
House has been on fire for ~3 hours. pic.twitter.com/jrCFFFQiLw

Fire at #Fremont home where suspect is barricaded. Police say he was alive/talking when phone died about 1/2 hr ago. pic.twitter.com/73fAFeSFQe 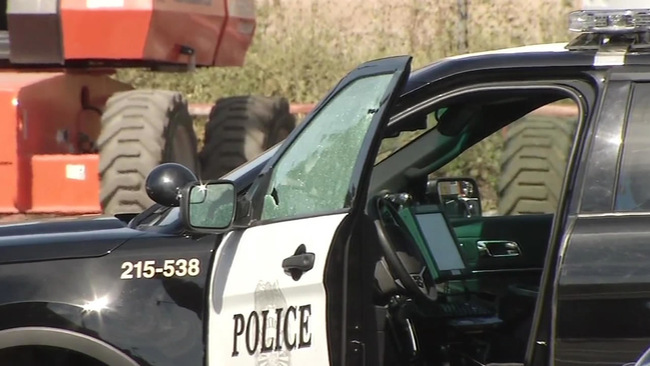 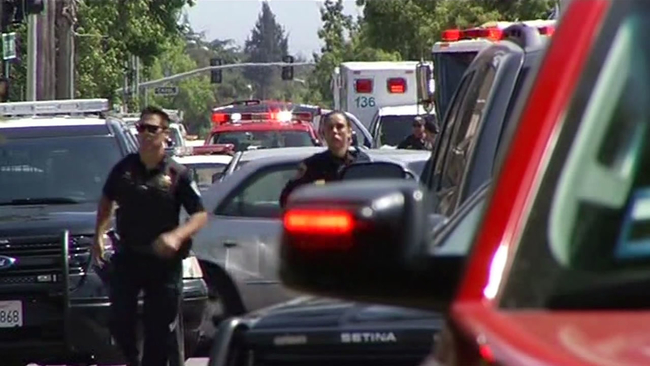