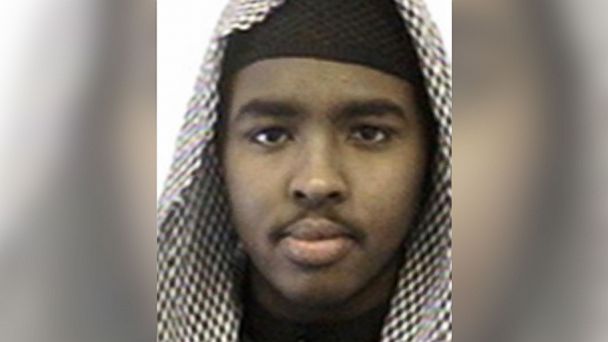 An American fugitive, who officials say is suspected of recruiting impressionable young men for terrorist groups including ISIS and was linked to at least one domestic terror attack in the U.S., has turned himself in to authorities, the State Department announced today.

Mohamed Abdullahi Hassan, known online as "Miski," surrendered to the government of Somalia early last month, a State Department spokesperson told reporters. Hassan has been wanted by the FBI since he left the U.S. in 2009 for allegedly providing "material support" to the al Qaeda-linked terrorist group al-Shabab in Somalia, often purportedly by convincing young American recruits to join. U.S. officials accuse Hassan of since moving on to recruiting for the Syria-based terror group ISIS.

Over the weekend ABC News reported that investigators were trying to determine if the couple who killed 14 people in San Bernardino last week had any online connection with Hassan in the months before he turned himself in.

Prior to the tragedy in San Bernardino, Hassan was linked to another deadly incident this year in Garland, Texas, where two men attempted to attack a Mohammad cartoon event, but were gunned down by police before they could kill anyone. In the days and weeks leading up to that attack, one of the gunmen had repeated social media contact with Hassan, who was urging his American followers to "do their part" like the three men who killed 12 people in Paris in January.

The State Department spokesperson said the U.S. Mission to Somalia is discussing Hassan's case with the Somali government. The official noted that the U.S. and Somalia do not have an extradition agreement.

Since he was thought to have left the U.S. for Somalia, Hassan has popped up repeatedly online as a vocal proponent of jihad. Each time Twitter shuts down his account, he simply returned under a slightly different username and quickly reconnected with his supporters and potential recruits.

"His influence is quite extensive," David Ibsen, Executive Director of the Counter Extremism Project, told ABC News after the Garland attack. "He's known as one of the go-to individuals online who individuals who want more information about how to travel to ISIS-controlled territory, who want information about what these radical groups are doing, they go to him."

Ibsen said Hassan is "kind of a new wave of propagandist who is really at the forefront of using communication tools to effectively put out that extremist message... Without individuals like him who are on Twitter and inciting violence, we could think that many of these events wouldn't actually occur."

An FBI wanted poster for Hassan that is still online says he is considered "armed and dangerous."