Thousands of women expected to strike on International Women's Day

KGO
By Lyanne Melendez
SAN FRANCISCO (KGO) -- With the slogan "Be Bold for Change," thousands of people across the country are expected to take the day off from work to highlight International Women's Day.

It's a day meant for people to protest some of President Trump's offensive statements towards women.

It won't be your traditional International Women's Day as organizers have a new name: "A day without a woman."

And some across the country are not going to work. "We want to focus on women's rights as far as equal pay, access to health care, education, many of the things that we feel are at risk right now," Women's March organizer Martha Shaughnessy said.

The day has always been one where women celebrate social, political and economic gains while at the same time focusing on areas that still need attention.

But following the success of the Women's March in January, organizers thought it would be appropriate to have a woman's strike on this day. "I marched in the Women's March and I feel really strong about Women's rights and the importance of women in the work force, but I'm not skipping work tomorrow," supporter Laura Burch said.

"I don't believe I'm staying home, but I will be wearing red in support," one woman said.
Besides wearing the color red, organizers are asking to boycott businesses unless they are owned by a woman or a minority.

The women's building in San Francisco's Mission District serves as a hub for marginalized women who come looking for services. The director although, said they can't afford to close. "A lot of them are immigrants and so scared with the new administration, that we decided to stay opened providing those services," Women's Building director Teresa Mejia said.

While some schools back east will close Wednesday, none of the districts in the Bay Area has plans to shut down. Although, San Francisco unified has substitute teachers and staff on standby should they need them.
Related topics:
san francisconew yorkdonald trumpu.s. & worldrallypresident donald trumpwomen
Copyright © 2020 KGO-TV. All Rights Reserved.
RELATED 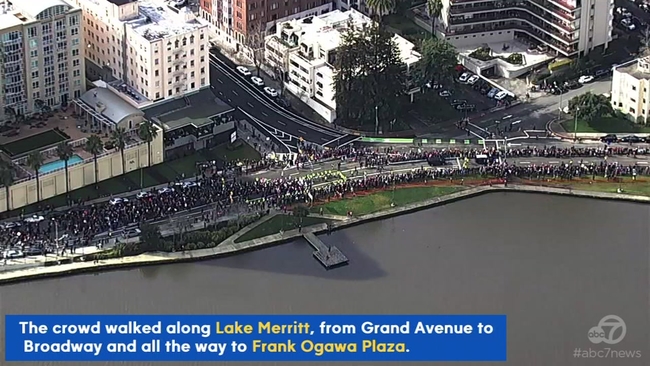