Inside the Food-'Skipping' Cafe That Turns Trash Into Meals 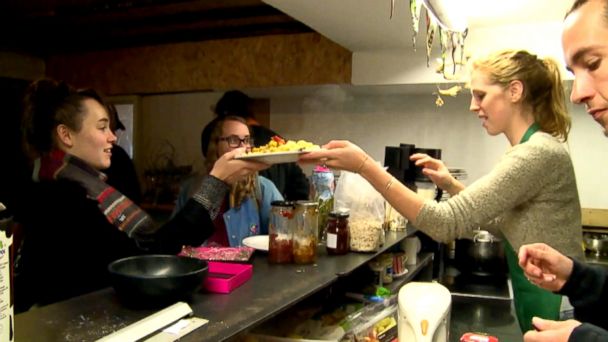 LONDON -- It's no secret that millions of tons of food are wasted every day, but solutions to this issue are few.

But one response can be found at a pop-up caf that opened this month in Bristol, United Kingdom, exclusively serving intercepted waste food. Launched by a group of volunteers, the purpose of the caf is to serve food to the needy and raise awareness about food waste.

One-third of all food produced worldwide gets lost or wasted, according to a recent report by the United Nations Environment Program and the World Resources Institute. Consumers in industrialized countries waste almost as much food annually as the entire net food production of sub-Saharan Africa.

The food served at the Skipchen varies, according to what the volunteers are able to rescue. In the evenings, teams go out and do "skipping," or finding edible food from the trash. Some of the food is also donated from restaurants and food banks or collected from farms.

Volunteers wash and peel discarded foods, and don't used anything that "doesn't look or smell right."

Sam Joseph, one of the co-founders, took an official course on sanitary practices that allows him to handle and serve food. He makes sure his volunteers used appropriate tools and cutting boards and have "a high level of personal hygiene," washing their hands regularly, he told ABC News.

He said they only use meat that comes under sealed packets and checks for any wholes. Everything is refrigerated and cooked as soon as possible.

Customers who came in the caf were overwhelmingly people already sensitive to the issue of waste, sometimes doing "skipping" themselves.

Customers are not charged a set price and asked to "pay-as-you-feel."

Until December, Skipchen will be operating daily at The Crofter's Rights, a pub that is leasing its 20-seat space for free.