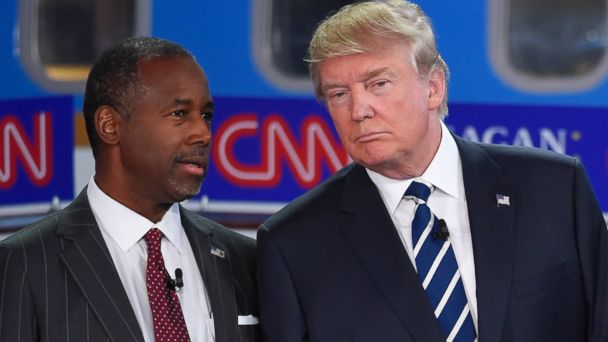 Trump has questioned Carson several times about a childhood story in his autobiography "Gifted Hands" in which Carson described once trying to stab a friend or relative. He also questioned a story Carson has told about hitting his mother with a hammer.

"It's a strange situation when you talk about hitting your mother on the head with the hammer," Trump said on ABC's "This Week." "It's a weird deal going on and I hope it all works out because I don't want to see Ben have problems over this stuff."

On the campaign trail and in "Gifted Hands," Carson describes his teenage self as rage-filled and violent. But recent reports have questioned elements of that narrative and in new interviews, friends, neighbors and classmates from his childhood said the young man Carson describes is a far cry from the one they knew.

Trump is no stranger to these kind of accusations. He has been questioned about his actual worth, and in his own book "The Art of The Deal," he wrote, "A little hyperbole never hurt." But when pressed about his exaggerations, he turned the conversation back to Carson.

"I can say that I never tried to hit my mother any way, shape, or form," Trump said.

Trump began questioning Carson last week after his rival's claim that he had received an offer for a full scholarship to West Point Military Academy was challenged. His campaign later clarified that he never formally applied nor was admitted, but maintained that he was invited to apply by a local ROTC officer.

Trump predicted the story would be the beginning of the end for the retired neurosurgeon's presidential campaign. In a separate interview with "This Week" on Sunday, Carson responded to Trump's comments.

"It's been proven that it wasn't a lie and none of the things are lies," Carson said. "What does it say about people who immediately jump on the bandwagon if they hear something bad rather than waiting and finding out what the truth is?"

Even with questions surrounding Carson's past, Trump recognized that the retired neurosurgeon was his biggest rival for the Republican presidential nomination.

"You know who's number one -- I'm number one," he said. "He's number two ... I would say that the first person that's number two is my top rival, and in all fairness to Ben, he's been the closest."