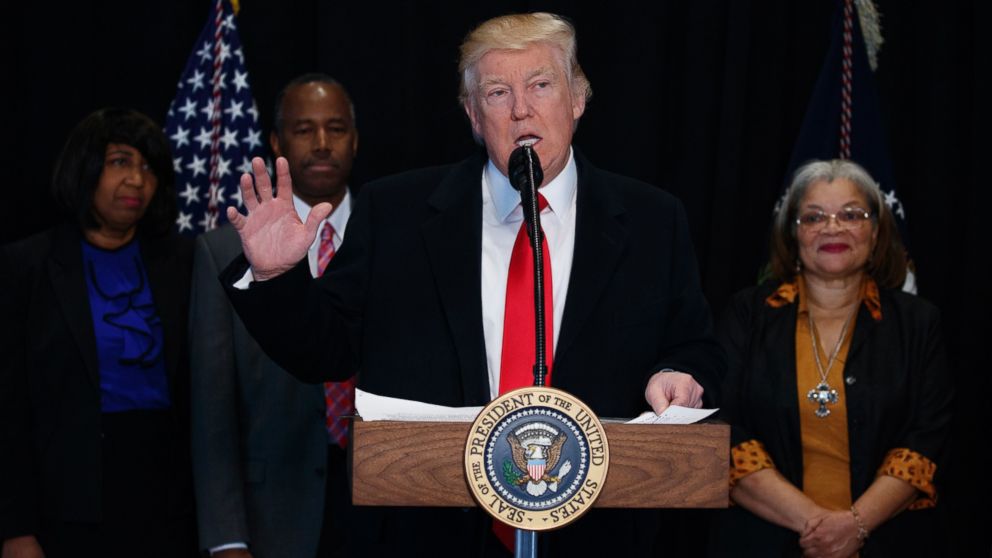 President Donald Trump denounced anti-Semitism today after facing criticism that he has not come out strongly enough against recent threats directed at U.S. Jewish centers.

"The anti-Semitic threats targeting our Jewish community and community centers are horrible and are painful and a very sad reminder of the work that still must be done to root out hate and prejudice and evil," Trump remarked after touring the Smithsonian's National Museum of African American History and Culture in Washington, D.C.

"This tour was a meaningful reminder of why we have to fight bigotry, intolerance and hatred in all of its very ugly forms," Trump said from a lectern set up at the museum.

Steven Goldstein, the executive director of the Anne Frank Center for Mutual Respect, found fault with Trump's statement, arguing that his "too little, too late acknowledgement of anti-Semitism" is "not enough."

"The president's sudden acknowledgement is a Band-Aid on the cancer of Antisemitism that has infected his own administration," Goldstein wrote in a statement posted on Facebook.

He accused the Trump administration of committing "grotesque acts and omissions reflecting anti-Semitism."

"It was only yesterday, Presidents Day, that Jewish Community Centers across the nation received bomb threats, and the president said absolutely nothing," Goldstein said.

The FBI announced it would investigate, along with the Justice Department, the bomb threats made at Jewish centers across the country, including the 11 threats made yesterday.

Responding to a question about the Anne Frank Center's statement at Tuesday's White House press briefing, press secretary Sean Spicer said he wished the group had delivered a different message.

"I wish that they had praised the president for his leadership in this area and I think that hopefully, as time continues to go by, they recognize his commitment to civil rights, to voting rights, to equality for all Americans," said Spicer.

Donald Trump's daughter Ivanka Trump, who is Jewish, tweeted last night that America must protect its houses of worship and religious centers.

Spicer said in a statement Monday, "Hatred and hate-motivated violence of any kind have no place in a country founded on the promise of individual freedom. The president has made it abundantly clear that these actions are unacceptable."

In a press conference last week, Trump was asked by a Jewish reporter about the recent wave of threats.

"I haven't seen anybody in my community accuse either yourself or - anyone on your staff of being anti-Semitic. However, what we are concerned about and what we haven't really heard being addressed is an uptick in anti-Semitism and how the government is planning to take care of it," Jake Turx of Ami magazine began.

Donald Trump cut off Turx and dismissed the question as unfair and "very insulting."

"No. 1, I am the least anti-Semitic person that you've ever seen in your entire life. No. 2, racism, the least racist person," Trump said, apparently interpreting the question as a personal attack.

"I hate the charge. I find it repulsive. I hate even the question," he said.

Trump was criticized last month for a statement he released on Holocaust Remembrance Day that did not mention Jews or anti-Semitism.

"It is with a heavy heart and somber mind that we remember and honor the victims, survivors, heroes of the Holocaust," he said in the statement. "In the name of the perished, I pledge to do everything in my power throughout my presidency, and my life, to ensure that the forces of evil never again defeat the powers of good."

Spicer defended the statement in a press briefing a few days later, saying it was "written with the help of an individual who is both Jewish and the descendant of Holocaust survivors."