KGO
By Laura Anthony
SAN LEANDRO, Calif. (KGO) -- A vigil is taking place in a small community near San Leandro, where a 14-year-old boy was struck and killed by a man speeding away from police. Ivan Cruz is being remembered as a happy teenager who was always riding a scooter or a skateboard.

"My son, my baby, my boy," said the victim's mother, Lydia Ortiz through tears. "He was my life, my world. He was everything for me."

Ivan was hit in a crosswalk while riding a scooter just after 6 p.m. Tuesday by a driver that was being pursued by Alameda County Sheriff's deputies.

The sheriff's department says about three minutes before Ivan was hit, deputies tried to stop the vehicle for reckless driving more than a mile away.

A chase ensued and officials say the driver crossed over to the wrong side of the road, eventually hitting and killing Ivan.

The vehicle never stopped and another deputy in the area gave chase, but the hit-and-run driver escaped.

Cruz's body landed about 20 yards away from the point of impact. Witnesses say it was a very sad scene, especially after the boy's mother came out and found her son's lifeless body in the street.

"He didn't have a chance of running or moving," witness Orfio Najera said. "It just hit him. It just came out of nowhere."

Najera says Cruz was on his scooter in the middle of the crosswalk when the police chase came flying down East 14th Street. Witnesses say the suspect car was driving southbound in the northbound lane.

"And as soon as he tried to swerve to get on the correct side of the driving area that's when he hit the boy who was trying to cross the street," Najera said. "He flew with the impact and the bus stop sign is what kept him from going any further because his body hit the pole."

The teen died at the scene. His friends, family, and loved ones are devastated.

"I'm not angry at anyone, I'm just angry at the whole situation," said the Liliana Rios, the victim's sister. "I don't know what to feel to be honest."

The teen's other sister, Julissa Rios added, "I feel like it could've went differently of course. Cause, I don't know."

"The boy with the scooter was the first one to ride his scooter across," said one witness.

That woman was in her car at the intersection when she says it happened right in front of her. She did not want us to show her face.

Both deputies were so distraught about what happened that they were sent home.

"It's very difficult for those deputies, let me tell ya," said J.D. Nelson with the sheriff's department. "You sign up for this business to help people and then a 14-year-old gets killed and it's heartbreaking. It is for everybody."

Ivan was a freshman at San Lorenzo High School.

"Students are definitely grieving so again we have things in place to assist those students at this time," said Ammar Saheli with the school.

Many of Ivan's classmates came to the memorial that was created where he died to mourn together.

"Loved that kid with all my heart," said Ivan's friend, Tony Coelho. "All of us did, you know. It's just crazy man, you know, you see a kid like that and you'd never expect something like this to happen to him, you know. It happened. You just took somebody from us, man, that was really special, you know."

"He is my everything, it's not fair," Liliana said.

Police say that a car of interest in the case, a 2001 maroon Saturn, was located in Fremont Wednesday. Alameda County investigators say they are working some leads and are bound and determined to catch the driver. People in the community are hoping an arrest comes soon.

"I just hope they catch the guy who did this because he deserves to be punished," said San Leandro resident Cheryl Peterson. A me

In the meantime, friends and members of the community are trying to get raise money to help Ivan's family with funeral services. A memorial fund has been set up at http://www.gofundme.com/ivancmemorialfund.
Related topics:
san leandropedestrian walkwayteenagerpedestrian injuredhigh speed chaseteenhit and runcrimealameda countychildren hit by carpedestrian struckvigilsheriffteenagersinvestigation
Copyright © 2021 KGO-TV. All Rights Reserved.
RELATED 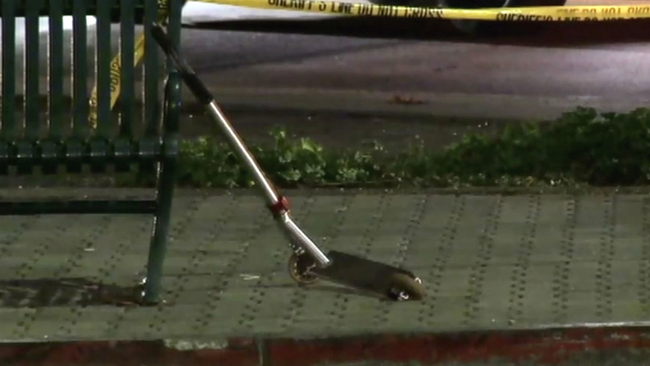