What You Need to Know About Today's Israeli Elections 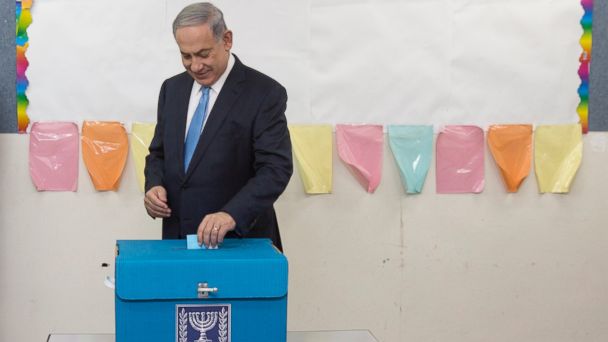 JERUSALEM -- Israelis headed to the polls today to settle a hard-fought parliamentary election. Here's what you need to know.

What Happens Today?Polls opened at 7 a.m. in Jerusalem and the first exit polls will emerge at 10 p.m. local time, but no one is putting too much stock in those numbers. By the numbers, there are 5,881,696 voters casting ballots at 10,372 polling stations for the 20th Knesset. In 2013, 67.8 percent of eligible voters cast ballots.

There are 25 party lists, six slates made up of more than one party and a staggering 1,280 candidates.

It's Complicated, Let's Go Through ThisIsraelis vote for a party list, so getting the most votes doesn't necessarily mean winning. To get in the front doors of the Knesset, the legislative branch of the Israeli government, a party must get a minimum of four seats.

Each seat is roughly 30,000 votes a pop. Once you're in, seats are allocated proportionally by vote counts: the more votes you get, the more seats.

Official results will likely be announced at noon local time Thursday. With 120 Knesset seats up for grabs, we'll learn how many votes each party got and which parties didn't make the cut. A majority coalition requires 61 seats and in Israel's history, no single party has ever won an outright majority.

In the days following the vote, Israeli President Rivlin will meet with party leaders to hear recommendations for prime minister. The president will then tap a prime minister candidate, giving that person the green light to form a coalition within 28 days.

That's when the wrangling begins, which could take a few days or a few weeks.

If successful, Israel has a new prime minister. If not, Rivlin goes back to the drawing board and someone else gets 28 days. If his second attempt fails, elections will be scheduled for 90 days.

Will He Stay, or Will He Go?All eyes are on Israeli Prime Minister Benjamin Netanyahu. Israel's longest-serving prime minister since David Ben-Gurion, most analysts agree the election has become a referendum on the man himself.

But the name everyone has been talking about is Isaac Herzog, who heads up the center-left Zionist Union, which includes his Labor Party and Tzipi Livni's Hatnua.

Herzog wants to resume negotiations with Palestinians, repair ties with the White House and has emphasized economic issues. The economy, specifically housing prices, is the biggest domestic issue getting Israelis to the polls today.

For Netanyahu's part, he has done tremendous damage to his relationship with 1600 Pennsylvania, skirted economic issues on the campaign trail in favor of ramping up his rhetoric on Iran and security.

Monday, in an 11th-hour bid for the right-wing vote, Netanyahu told the NRG website, owned by casino mogul Sheldon Adelson, that if he is re-elected, there would be no Palestinian state.

So, Who Is Going to Win?Recent polling suggests Herzog's center-left party could best Netanyahu's right-wing Likud party in total votes.

But it's hard to see how Herzog gets to the magic number 61. This means Netanyahu will likely get the first stab at forming a government with the other right-wing parties, which probably leaves him in the PM's office.

Early this morning as the polls opened, Netanyahu tweeted his first calls will be to other right-wing politicians, adding: "no unity government with the left."