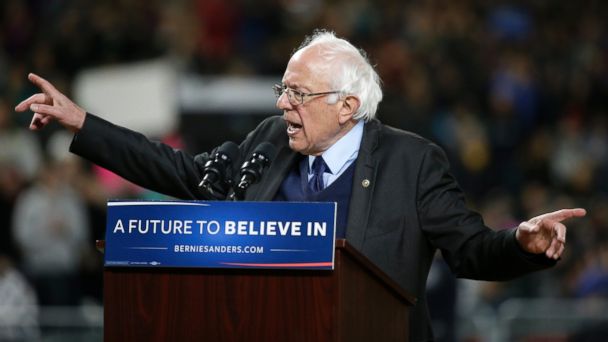 ABCNews
By MARYALICE PARKS
Bernie Sanders did not just win all three states that voted this weekend -- Washington, Alaska and Hawaii -- he won them by overwhelming, impressive margins. The presidential hopeful won every county in Washington, and some of his biggest victory margins came from the state's most rural and traditionally conservative areas.

The win will likely mean a fundraising boost for the small-donor driven campaign. Sanders does not have a super PAC and instead has enjoyed injections of cash from his fans after big wins or important nights in the election calendar. According to the campaign, supporters from Washington State already give to his cause at disproportionately high rates, so these wins will likely produce another windfall.

The wins also validate Sanders' commitment to an extended primary. Despite the fact that he is trailing former Secretary of State Hillary Clinton by a significant number of delegates needed for the nomination, Sanders has pledged to stay in the race until all 50 states get their say.

Since all delegates on the Democratic side are awarded proportionally, Sanders will receive a sizeable number of delegates from Saturday's blowouts and dent Clinton's delegate lead. Likewise, by winning so handily, he makes it harder for the super delegates from those states to stay committed to Clinton. The elected officials and party elites who hold these posts can swap their vote at any point until voting takes place at the party convention and will face grassroots pressure -- and pressure from the campaign -- to back the will of their hometown voters.

Sanders told ABC News' Jonathan Karl Sunday morning that he remains the "underdog" but that the campaign believes they "do have a path to victory."

"What we showed yesterday is in fact the momentum is with us," Sanders said. "We think we're going to do well in Wisconsin. We think we got a real shot in New York. And then we go out to California. You go out to Oregon. That's the most progressive part of America."

Still Clinton is already leading by a greater margin than President Obama ever had during the campaign for the Democratic nomination in 2008.

Sanders' landslide victories not only mean that the Clinton campaign will have to continue to run primary races in Western states, but also that they still have a significant amount of work to do to bring progressives on board for a general election, should she win the nomination.

Washington in particular has been a bellwether of change for the Democratic Party and progressive policies: The state has legalized marijuana for recreational use and in Seattle the process has begun to raise the minimum wage to $15 per hour over time. By overwhelmingly backing Sanders, who says he would pave the way for these models to extend nationwide, Washington voters were offering a second thumbs up to these trends.

However, his support among left-leaning voters from these Western states only paint part of the picture, as Sanders also enjoyed large crowds and enthusiastic backing in redder parts of Washington and Alaska.

Despite a strong GDP and strong average wages, the economy in Washington has changed rapidly in the last eight years, leaving a lot of people in its wake. The state's unemployment is fairly high, in contrast to the positive indicators in the state economy, and blue collar jobs such in the mining and logging industry have taken a serious hit, falling 6 percent to 8 percent in the last four years, while technology and information industry jobs have soared almost that much in the same time. There is a feeling of income inequality in the state.

In addition, these states are known for their counter-culture. Ken Miller, a Clinton supporter and well-known party organizer from Tacoma, Washington, told ABC News, "The party is fairly irrelevant in people's lives."

Sanders fans celebrating in Seattle's Safeco Field Friday night before voting the next morning said they were inspired by the senator's unwavering commitment to stay in the race.

Kimberly Mayhle from the city's Capital Hill neighborhood said she was with Sanders "until the end," and that friends and neighbors of hers were "100 percent more excited" for this election than they had been in the past. Her friend, law student Andy McClenahan, said he was glad Sanders was continuing discussion on key issues he supported like reforming the criminal justice system and higher wages.