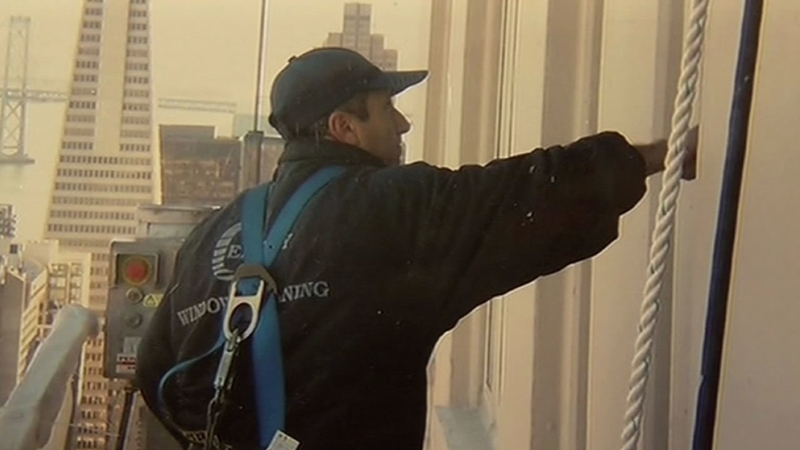 SAN LEANDRO, Calif. (KGO) -- ABC7 News followed up on the condition of the window washer who fell on a car from an 11-story building in San Francisco. It happened nearly two weeks ago and he is still in critical condition at San Francisco General Hospital, but talking. His 19-year-old daughter, Monica Perez spoke only to ABC7 News.

The window washer is 58-year-old Pedro Perez and he is still in the intensive care unit at the hospital. His family said they see him improving a little every day and they too are amazed that he survived that fall.

The San Leandro resident had 15 years under his belt as a window washer. That's why his family doesn't know how he managed to fall from the roof of a building on Montgomery Street, landing on a moving car.

"He knows how equipment has to be set up. He knows how one little thing not being set up right, can cause an accident," Monica said.

After the fall, Perez was helped by several pedestrians. Minutes later, a confused co-worker who mistakenly thought Perez was dead called the family to say he had passed.
For about an hour the family didn't know he was alive. Monica said they didn't know "until the hospital called us and told us he was alive."

The moving car he landed on helped break his fall. Since the November 21 Street accident, Perez had several operations.

"He fractured his pelvic area, so it's completely shattered, and then had had internal bleeding," Monica said.

While Perez broke his right arm in several places, he legs and back were not broken. And according to the family, he suffered no major head injury.

"He's not on the breathing machine anymore. He can breathe on his own. He's talking," Monica said.

The family reached out to ABC7 News because they need help. While his has medical insurance, his union, SEIU United Service Workers West, had not contacted the family directly, until Wednesday when we called the union. During our interview a union representative called to offer help.

"We're probably going to put him on disability. It's in progress," Monica to the representative.

Perez has a wife and three daughters. The family remembers watching the accident on TV, in disbelief.

"It's a really big fall. How does one fall from that survive and survive?" Monica said.

People who witnessed the fall are still asking themselves the same question.