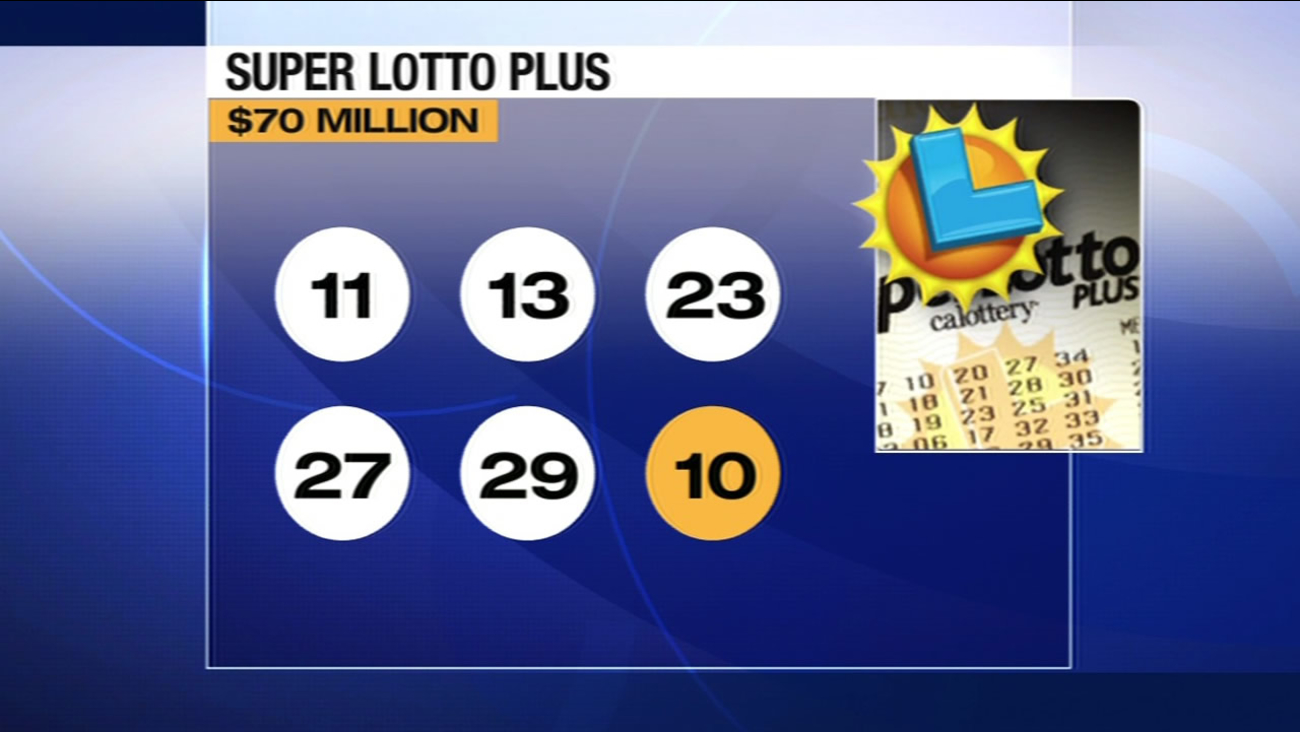 Lottery officials say a ticket that matched all six numbers to win the $70M SuperLotto Plus jackpot was bought in San Francisco.

SAN FRANCISCO -- A California Lottery ticket that matched all six numbers to win the $70 million SuperLotto Plus jackpot was bought at a Safeway in San Francisco's Sunset District, a lottery spokesman said Sunday.

The winning numbers of 13, 11, 23, 27, 29 and the Mega number 10, were drawn Saturday night and a ticket with the numbers was purchased at the Safeway at 2350 Noriega St., lottery spokesman Alex Traverso said.

The jackpot is the largest for SuperLotto Plus since the $76 million top prize awarded on a ticket bought in Shasta City on Feb. 7, 2009, Traverso said.

The person with the winning ticket may claim the $70 million paid out as an annuity over 30 years or accept a cash payout of $40.9 million, before federal taxes are taken out, lottery officials said.

The Safeway store will receive $350,000 from the state lottery for selling the jackpot ticket.

SuperLotto Plus is a California lottery game where players chose five numbers from 1 to 47 and a jackpot-winning Mega number from 1 to 27.

The state lottery is also awarding $30,108 to two winners, one in Riverside and one in Hawthorne, who correctly chose the first five numbers but not the Mega, according to the state lottery's website.
Related topics:
san franciscosunset districtsafewaylottery
Copyright 2021 by Bay City News, Inc. Republication, re-transmission or reuse without the express written consent of Bay City News, Inc. Is prohibited.
TOP STORIES
3 Bay Area counties may be 1st to mandate masks again
More of Bay Area moves into 'exceptional' drought
Federal workers required to get vaccinated; military may be next
Bay Area women win free flights for a year in airline sweepstakes
SJ police arrest man with suspected explosive device
'Is this really happening again?': COVID-19 anxiety returns
Things to do in Bay Area: Aloha by the Bay, Sonoma County Fair
Show More
Bay Area hospitals prepare for 4th COVID surge
Las Vegas to mask up indoors again after Nevada adopts COVID-19 rule
Here's how, when to watch NBA Draft on ABC
Tsunami warning canceled after 8.2 quake off Alaska coast
Here's how seawater could be answer to California's drought
More TOP STORIES News